As it is the biggest pro wrestling event of the year, this will be an all WrestleMania edition of the "Wacky Wrestling VHS Boxes" series. Unlike the standard four tapes I usually include in these pieces, I'll showcase five of these this time! 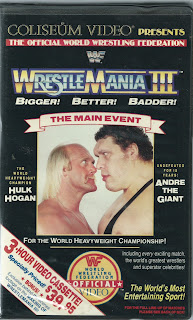 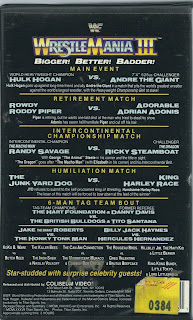 Starting this off comes a tape I found just recently that was buried in a crate full of books ... WrestleMania III! The main event is one of the most legendary matches ever, Hulk Hogan vs. Andre the Giant in front of over 93,000 people (or so it's claimed) at the Pontiac Silverdome. Also on the card was Randy Savage defending the Intercontinental Championship against Ricky Steamboat in a classic, action packed bout, and Roddy Piper competing in his "farewell match" against Adrian Adonis. This was one of the early WWF tapes as well, judging by the black clamshell box. Also, look at the price on the bottom left corner ... $39.95! That's the same as $85.50 today! 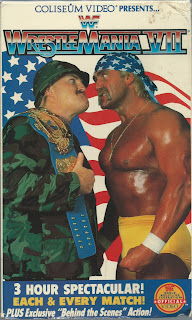 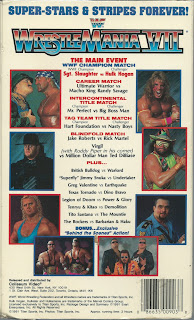 I mentioned in the first entry in this series that WrestleMania 8 was my favorite WrestleMania of all time. I wouldn't say this one is anywhere near it, but it's still a really, really good show by all accounts and right in the middle of three really good WrestleMania shows. This particular show had a "Stars and Stripes" theme to it since it took place during the Gulf War and we had Sgt. Slaughter, an Iraqi sympathizer, defending the WWF Title against Hulk Hogan. Also, there is a fantastic match between Ultimate Warrior and Randy Savage in which the loser must retire. The problem is that on this tape, about five minutes of the match is cut out. I'm not sure why, perhaps to make sure the whole show fit on the tape?

The case itself is one of the old oversized cases that the WWF did for their tapes for a few years. I really like the design on the front with Hogan and Slaughter face to face and the American flag in the background. The back is pretty basic with just the standard stock photos and the complete card. To be honest, the back of this tape and the back of the WrestleMania 8 tape look nearly identical, except for the color. The front also says that "each and every match" is complete, which as I mentioned earlier, is lies! 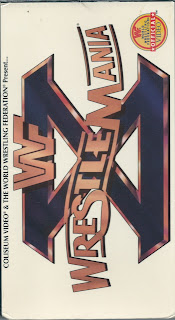 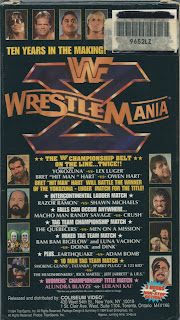 There are two matches on this show that make it legendary. First, there was the ladder match between Shawn Michaels and Razor Ramon but before that, a classic match between Owen Hart and Bret Hart opened the show. By this time, the roster had completely flipped over from the Hogan era with most of the stars from that era gone, with the exception of Randy Savage and Earthquake. This would be the final WrestleMania for both as well. There was supposed to be a 10-man tag team match as well on here but it was canceled. This is a show I could watch over and over again as it just breezes by. The box for this though seems pretty standard, at least on the front. The back also looks really squished with the giant logo and all the matches and info having to be crammed into the bottom half. 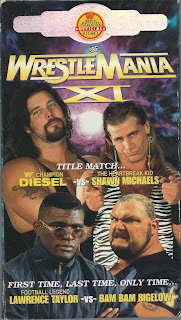 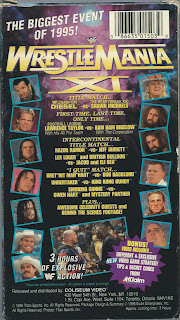 Going from one of the better editions of WrestleMania to one of the worst, if not the worst. This show is widely regarding as one of the worst WrestleMania shows ever. In the main event, Lawrence Taylor, yes the NFL player, fought Bam Bam Bigelow. The match was better than it had any right to be, mainly because of Bigelow, but it's still lauded as one of the worst WrestleMania main events of all time. The other thing about this show is that it just didn't have that aura that WrestleMania is supposed to have. It was marred by technical difficulties throughout the show, the arena was small and dark, and when there's a match on it that Bret Hart calls "the worst match of his career", you know you've got a bit of rubbish. The box however isn't that bad. I really like the design on both the front and the back and it really makes you forget just how bad the show really is. 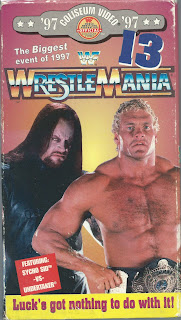 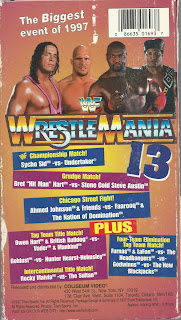 The last WrestleMania on this entry and the last one released by Coliseum Video before they went kaput later that year, this show is remembered for one match ... Bret Hart vs. Steve Austin in a Submission Match. If you just mention the words "Bret vs. Austin" to any wrestling fan, their mind immediately goes to this match. It was an all out brawl from bell to bell and has the famous ending of Austin passing out in the sharpshooter and special referee Ken Shamrock stopping the match. Words honestly can not do justice as to how great this match is, so I would advise you to seek it out in any way possible.

That being said, the rest of this show was rather unmemorable and so is this box if you look at it. My biggest issue is that a lot of the poses on the front and the back look very forced and what is Sid holding in his hand on the front cover? I think Coliseum Video knew they were on the way out and did as little as possible for the box cover. Compare it to the others I've show here and see for yourself.

Hope everyone enjoyed these old WrestleMania VHS boxes and WrestleMania week in general. Enjoy WrestleMania tonight and tomorrow is Opening Day for baseball and a return to some baseball card related fun.