In lieu of doing another wrestling VHS box post, I felt like I should maybe come up with something a little bit different this time. So, I thought it'd be fun to look at the first eight WrestleMania events, which are chronicled in a set released through Coliseum Video, the WWF's home video distributor at the time, in 1993. 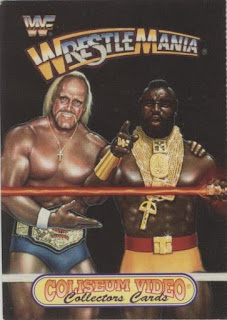 These cards are pretty basic with some artwork detailing the event, like this one from the first WrestleMania in 1985. The back gives a brief description of the event. These cards came in three card panels that were given out as a free gift when you rented a WWF tape from your local video store. 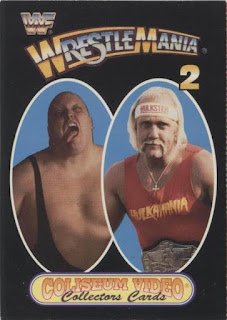 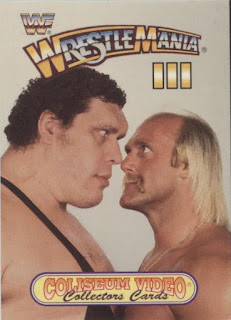 Some of the cards would feature artwork very similar to the VHS box cover, others like these from WrestleMania 2 and WrestleMania III featured generic pictures or posed shots. The one thing I don't really like about the WrestleMania 2 card is the fact they didn't use the giant red "2" from the original logo. 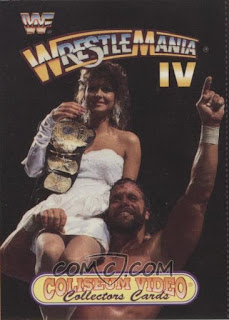 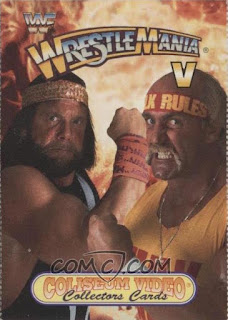 WrestleMania IV and V were odd in that they were held in the same venue, Trump Plaza (aka the Atlantic City Boardwalk Hall) in back to back years, 1988 and 1989. Also, WrestleMania IV was interesting in that it was the beginning of the year long story between Hulk Hogan and Randy Savage which led to them facing each other at WrestleMania V for the WWF Title. 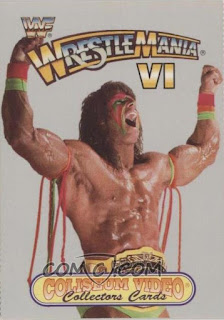 In 1990, the WWF went across the border for WrestleMania VI and ran the Skydome in Toronto to feature the title vs. title showdown of Hulk Hogan against Ultimate Warrior. For this card, I wish they would have used the VHS artwork instead of just a generic Ultimate Warrior picture. The VHS cover is awesome with a space background and the two just looking as crazy as humanly possible. 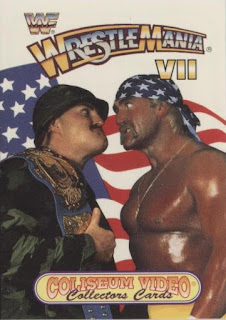 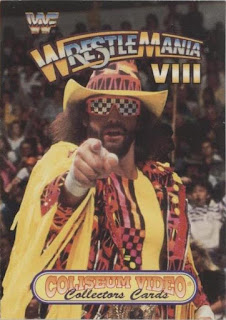 These two are some of my favorite early WrestleMania shows. I've already detailed my love for WrestleMania VIII in the original VHS box posts but I think often WrestleMania VII gets overlooked. It's got a great match between Ultimate Warrior and Randy Savage, the WrestleMania debut of the Undertaker, and the final pay-per-view match of the original Hart Foundation. There's also the main event with Hulk Hogan facing Sgt. Slaughter. 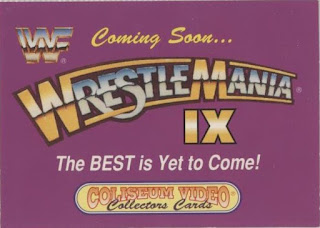 Completing the nine-card set is this promo card of WrestleMania IX. When these cards were produced, the event had yet to take place but going back and looking at it now, it was a very unique show with a Roman coliseum theme to it. While I think it gets a bad rap as the "worst WrestleMania ever" in a lot of countdowns (WrestleMania 11 and WrestleMania 32 are far worse), it's a fun show to watch.

That does it for a quick look at these WrestleMania cards from Coliseum Video. I hope everyone enjoys the marathon show that WrestleMania will be this year!
Posted by Adam at 10:00 AM