Today is just a brief post to post a quick thank you for a recent PWE I received from Gavin over at the popular Baseball Card Breakdown blog. We did a small swap as I sent him a Benchwarmer card that didn't fit my collection and a few extras I had. In return, he sent over a fun PWE. 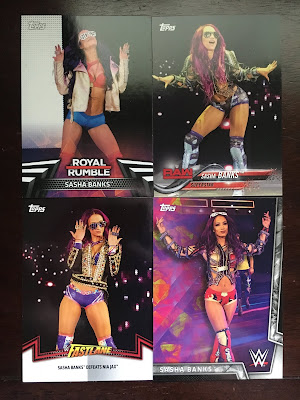 The PWE he sent over was only a handful of cards but they're cards that definitely fit my collecting interests. First up, this foursome of Sasha Banks cards. I really enjoy the run she and Bayley have been having as a tag team in the Women's Tag Team division. It's too bad they lost the Women's Tag Titles already to the Iiconics in the four corners match at WretleMania recently. 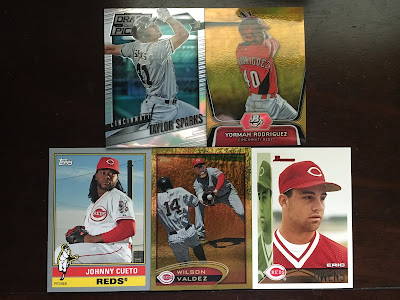 There were also a few Reds cards included. The Cueto and Wilson Valdez cards are obviously parallels. I'd honestly forgotten completely about Wilson Valdez as a backup infielder on the Reds. Taylor Sparks is currently a Reds farmhand stationed with the AAA club in Louisville and is not a part of the 40-man roster. Last year in 126 games with both Louisville and AA Pensacola, he hit .206/.279/.383 with 14 HRs and 47 RBIs. 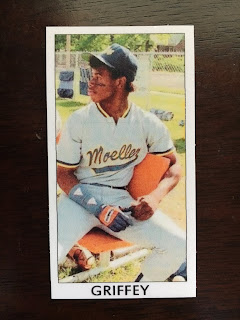 Finally, as is tradition in Gavin's trade packs, he always includes a custom card. This is a mini he made of Ken Griffey Jr in the Moeller High School uniform. Pretty neat if you ask me. Moeller High School also happens to hold a very large card show twice a year which I'm hopeful to get to at some point.

Thanks for the impromptu trade Gavin! Let's do it again sometime.