Marichal and the Pilots

A few weeks ago, you may recall, I went to the monthly card show at the Nutter Center in Dayton. Well, after showing off my wares from that show, I received an email a few days later from one Mr. Haverkamp proposing a trade.

You see, he'd been in search of the 1962 Post Juan Marichal card I picked up for a while now in order to help complete his team set. He graciously offered another vintage Marichal and some 1969 Pilots cards in return. I figured why not. It'd be a nice to do a quick trade with a new trading buddy. 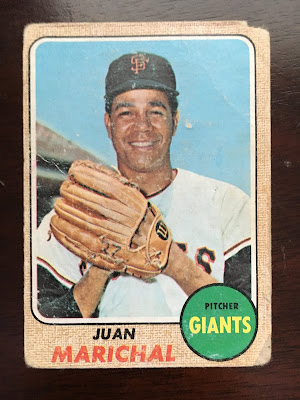 Here's the vintage Marichal as promised to replace the Post Marichal I'm trading. I'd picked up a 1969 Marichal at the show so this will compliment it nicely.

The rest of the PWE was filled with 1969 Topps Seattle Pilots cards, which is one of my currently active collecting pursuits. I'm trying to get all Pilots cards from the 1969 and 1970 Topps sets. 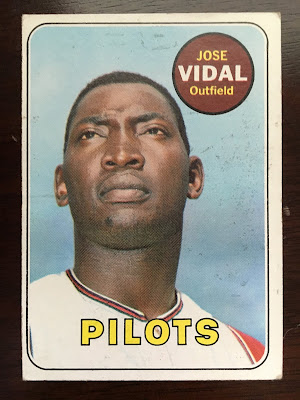 Jose Vidal only appeared in 18 games early in the season for the Pilots as a backup outfielder after being purchased from the Indians. He was swapped to the Yankees in May for another outfielder in Dick Simpson but never again appeared in a major league game after the trade. He spent 1969 and 1970 at Triple-A Syracuse and then bounced around to first Toledo, then to the Japan Pacific League for Nishitetsu and finally a few years in the Mexican League. 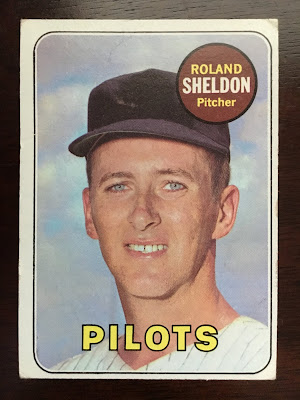 Roland (Rollie) Sheldon is a curiosity. Not only is this a Pilots card but it's also a zero year card as Sheldon never appeared in a single game for the Pilots. His last major league appearance was in 1966 where he made it into 23 games with Boston. After that season, he was sent to the Reds to complete an earlier trade between the two teams. As for his association with the Pilots, it was a brief 5 game run with the Vancouver Triple-A club in 1969. 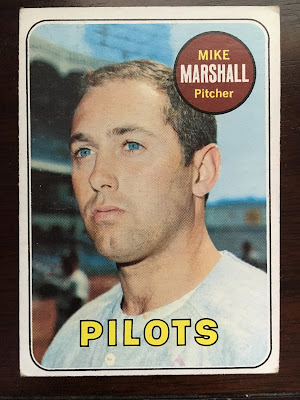 Mike Marshall is indeed that Mike Marshall. The same iron-armed hurler who had a stellar four-year run with the Expos and Dodgers in the early 70s and would win the 1974 NL Cy Young Award, spent the 1969 season with the Pilots, who'd selected him from the Tigers in the expansion draft. Marshall posted a 5.13 ERA with a 3-10 record over 20 appearances for the 1969 club. 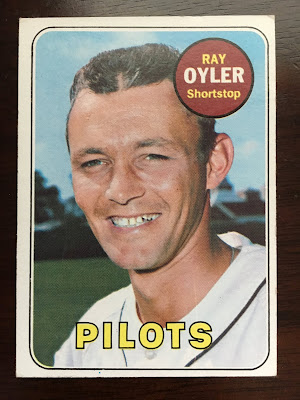 Ray Oyler was the everyday shortstop for the woeful Pilots in 1969 and was also a fellow expansion draftee from the Tigers like Mike Marshall. He would be out of MLB after the 1970 season with a meager .175 career average. 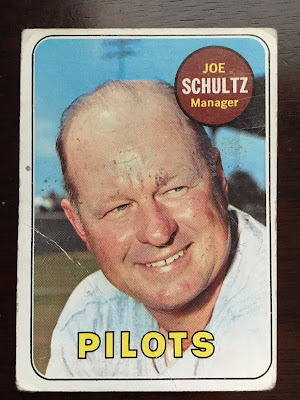 And finally the man who captained the club from the dugout, Joe Schultz. His playing career was mainly as a backup during the during the 1940s with both the Pirates and the Browns. 1969 was the only full season Schultz managed in the majors. His only other managerial stint was 28 games with the Tigers at the end of the 1973 season after Billy Martin was canned.

That's five more cards I can knock off my Pilots want list and a nice Marichal to add to my collection. Thanks for the trade Mr Haverkamp! You're return card is going out this weekend.