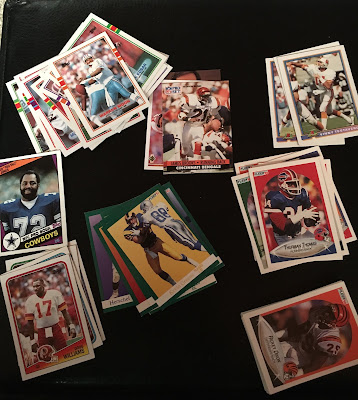 I'll admit, I'm not the biggest football person in the world. I enjoy watching the Bengals during the season and I'll watch other games here and there but I'm not into it like a lot of people are. I couldn't tell you which rookie ran the fastest 40 during the combine or who the top prospect from (insert college here) is but one thing I can tell you about are football cards. More importantly, I can tell you about football cards that I like.

While my primary football collection consists of mostly Bengals cards, from time to time I don't mind picking up football cards here and there, especially if they're decent cards. I hardly ever buy them in bulk though but bulk football cards is what I have here, consisting of the final batch of stuff from the community yard sale nearly two months ago. 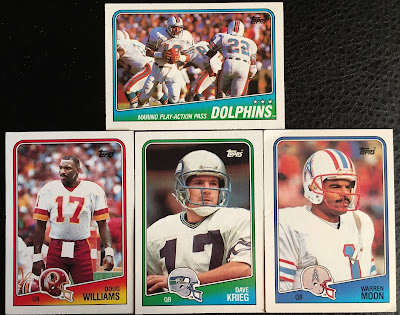 I really like the design of 1988 Topps football. It's a lot more colorful and lively than its baseball counterpart. The team logo on the helmet and the colored border on the bottom is a pretty nice touch. However, the back is really what I think is neat ... 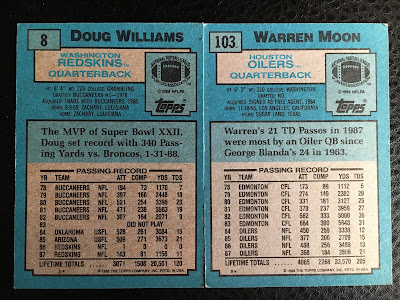 Take a look at the stats, see something interesting? Yep, that's stats from other leagues such as the USFL and CFL on the back of an NFL licensed trading card. That is super cool. 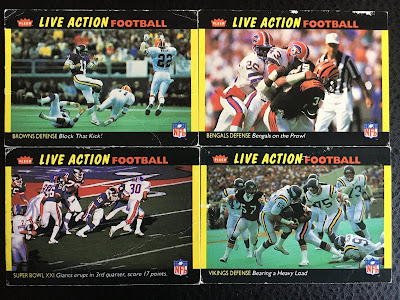 These are some of my favorite from mix and it's the first time I've ever seen these Live Action Football cards. The photography on them is just fantastic. Also, they're not in perfect condition, they've got some wear, some dinged corners. That just adds to the appeal to me. 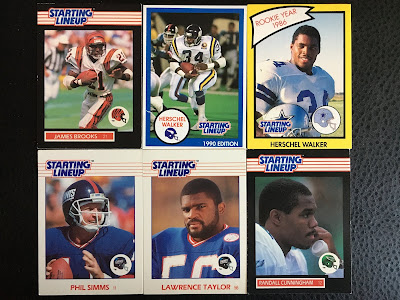 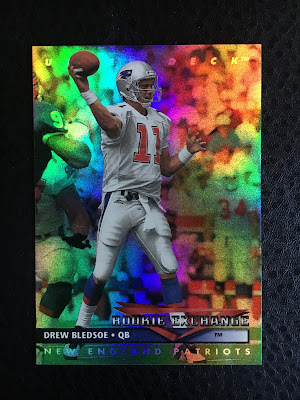 Here's a pretty neat Drew Bledsoe rookie exchange foil card. When I bought the lot, this was in a really faded and beat up screw down case. Now, it's freed from it's previous hard plastic prison. 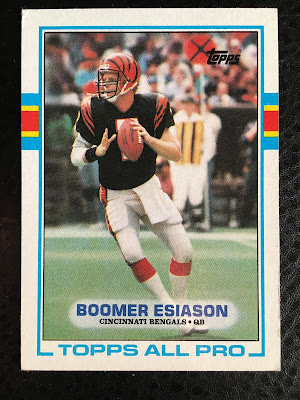 I plucked out a nice batch of Bengals cards from the lot to add to my Bengals binder (which I'm planning on restarting here soon ... more on that to come in the future). In the interest of space though, I'll share two Bengals cards I didn't know I was looking for until I found them. First, this Boomer Esiason card from 1989 Topps. Esiason was the first Bengals quarterback I was ever aware of when I was growing up, I think which is why I'm drawn to collect him. 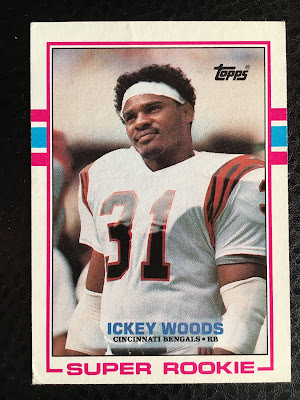 But here's the Bengals card I was super excited to come across. From the same 1989 Topps set, it's the Ickey Woods rookie card! This was probably my favorite find of the whole lot.

So there's a bunch of football cards from the yard sale lot and finally, I can put a bow on the whole yard sale cards. Thankfully, the community yard sales don't come around again until next May. I doubt my haul will be as impressive as this year though.