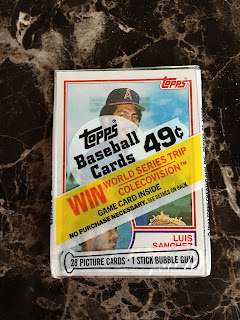 Ah yes, 1983. The year of Return of the Jedi and A Christmas Story opened in theaters, Hooters opened their first location, and the year that Michael Jackson's Thriller video premiered on MTV. In baseball, it was the year that Don Sutton recorded his 3,000th strikeout, the year Nolan Ryan bested Walter Johnson's career strikeout record, the year the Orioles won the World Series, and the year of the infamous "Pine Tar Game" between the Royals and Yankees.

It was also a year that giant baseball card packs, such as this, were still under 50 cents. It was also the year of the rookie card with Tony Gwynn, Ryne Sandberg, and Wade Boggs all having their rookie cards in this set. Will I be lucky enough to pull one of those? Or will this pack bomb like Krull did at the box office?

Not a whole lot here to get excited about although Bob Shirley will go with my 80s Reds cards.

I like these Super Veteran cards and I think Topps should bring them back in the base set, perhaps when a star player retires, do one as tribute card in the base set (and please don't short print it!)

The first Hall of Famer out of the pack and it's Fergie Jenkins. I don't have a lot of cards of him so this is a cool little addition. There's also a Dan Quisenberry all-star card here which will get a slot in the 80s binder as well.

Nothing here to get excited about unfortunately.

Another "Super Veteran" card, this time of Graig Nettles. 1983 was Nettles' last year with the Yankees before he was traded off to the Padres just before the 1984 season. The also yields the first manager card of the pack, Bill Virdon of the Expos.

Nothing much here either.

I love the old school all blue Brewers uniform on Bob McClure. Not to be outdone though, Claudell Washington is sporting his best dark blue Braves top. 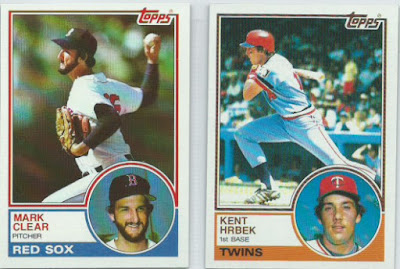 Herbie! It's not a rookie card but a second year card will definitely do of one of the cult favorites of Twins fans. 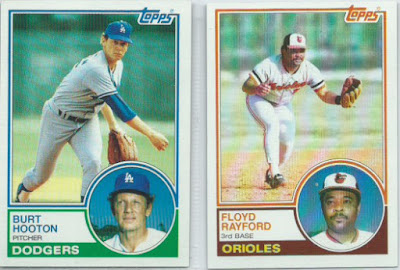 The last two in the pack. "Happy" Hooton was nearing the end of the line and only had a few more years in the tank left at this point.

For 50 cents, I enjoyed opening this. While it wasn't great, I don't feel like I bombed out totally like the aforementioned Kroll. There were a few winners to be had and that's about all you can ask for from a pack this old.