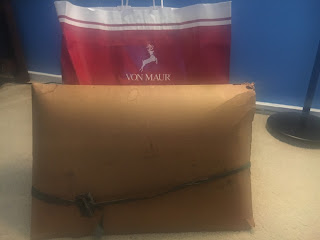 At my grandparent's house there was a cabinet built in to the corner of the living room. I'm not sure exactly what to call it, perhaps a curio cabinet, but i'm not sure. The thing went floor to ceiling, had three or four different compartments to it and looked like it was made of polished oak. It had all kinds of stuff stored in in. The middle section with the glass doors had fine china, the open section below it had family photos, and the bottom is where I kept toys as a kid. The very top section though is where my grandfather had his time capsule. The top section was the smallest of all and only on rare occasions was it opened, typically when something was being added to it.

When my family and I were cleaning out valuables after my grandfather passed away (five years ago this fall by the way) we pulled everything out of the time capsule. The large brown folder was kept in tact, everything else was put into the Von Maur bag seen above (for the record, I don't shop there). My mom kept it with her and the files had been sitting in a storage closet in one of her spare bedrooms since then. I asked her about it recently and dug out the files during a visit a few weeks ago. I took them home and just this past weekend I had time to sort through everything.

The bag contained lots of old newspapers, all of them the Middletown Journal to be exact, which was the local paper up until it merged with the other local papers in the area in 2013. The papers were either rolled up or folded, but I was able to gently open them up to where they laid flat enough for me to take pictures. I took pictures of every paper and item in the bag. I've pulled out most of ones that contained minor news or I was unsure why they were kept, so what I'm sharing here is mostly national or regional news covered in a local paper. Some of these more local stories I'll expound a bit on, some others like major national or international stories, I'll just let speak for themselves. 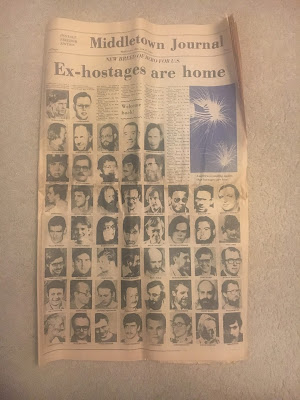 This is the January 27, 1981 edition covering the release of the hostages from the Iranian Hostage Crisis. The entire paper covers the situation from start to finish including how they were released, the timeline of events, etc. 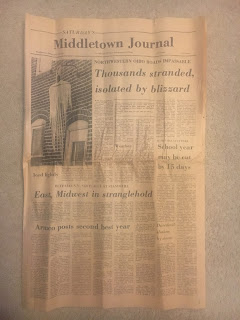 This edition from January 29, 1977 covers the blizzard of 1977 which dumped up to 100 inches of snow in parts of Buffalo and Southern Ontario from January 28 to February 1. 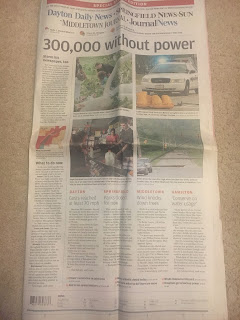 This is when the remnants of Hurricane Ike rolled through the area and caused a massive blackout. It was called by meteorologists as a "once in a lifetime event". We didn't get any of the rain but we got a huge windstorm. At the time, I was still living with my mom and we were without power for two days. My grandparents were without power for four days. The only way to communicate was with cell phones and even that was done with great difficulty. It was pretty much like the apocalypse hit. 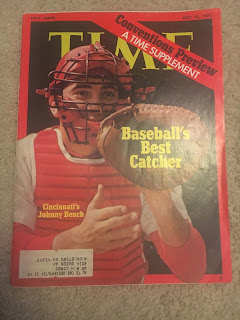 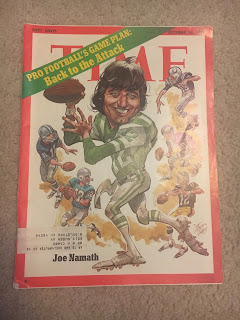 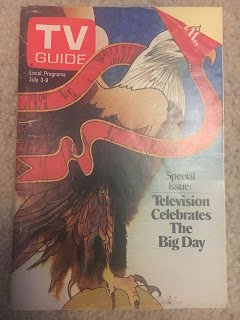 Newspapers weren't the only things I uncovered, I found two sports related TIME magazines and special issue of TV Guide celebrating the 1976 Bicentennial. 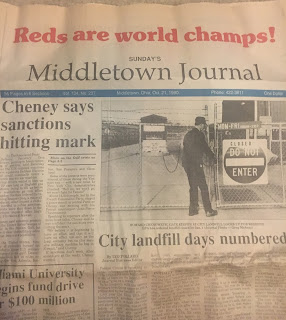 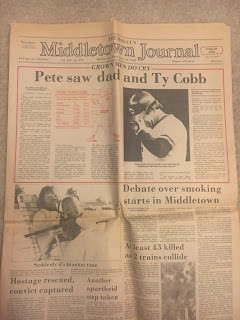 Here are a few sports related papers I found from major moments in Reds history. The first is the paper from when the Reds won the World Series in 1990. The picture you see is Barry Larkin doing his best Ozzie Smith. Next is the paper from Pete Rose breaking Ty Cobb's all-time hit record. One of the unique things about these papers is that you also get to see what else was happening locally at the time, such as the city landfill's days being numbered from the 1990 paper. 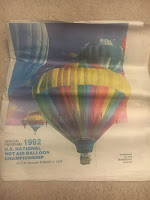 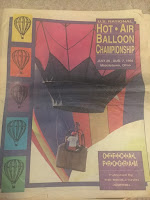 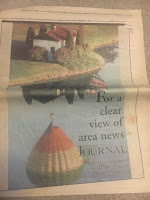 These are the final things I'll showcase from the bag. From 1992-1994, Middletown was home to the U.S. National Hot Air Balloon Championships. What exactly that consists of, I have no idea. However, it was really fun as every day the balloons were here, we would see them in the sky all over the city and chase some of them. These weren't your standard balloons either, I remember there being a Schlitz beer balloon, a Foot Locker balloon shaped like a shoe, and other such oddities. Somewhere, I think, there's a hat with a bunch of autographs from the pilots I got during a balloon glow on one of the final nights of competition. At some point in the future, I might delve into these a little bit more. 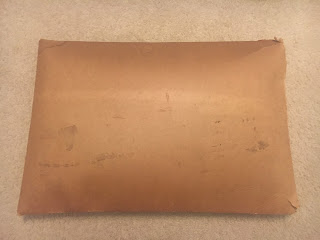 Now we come to the unsuspecting, plain, brown envelope. I pulled the contents out and found another package made from cardboard with "Educational Materials" stamped on it that was stuffed with newspaper clippings. More on that shortly but the first loose item I found gave me a clue as to what this envelope consisted of. 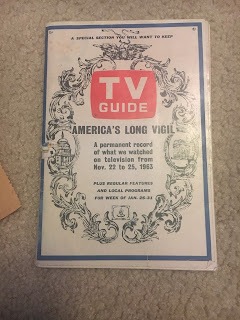 This issue of TV Guide is from January 1964 but profiles and provides a record of what Americans viewed from November 22nd to November 25th, 1963 ... essentially the dates covering the Kennedy Assassination and the events afterwards. 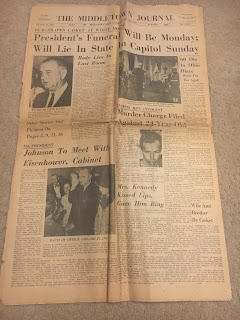 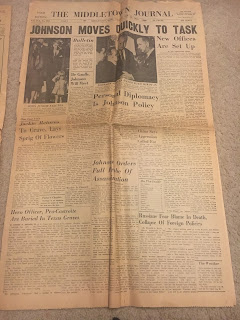 There were other papers and clippings in the envelope but the vast majority of the files were from the coverage of the Kennedy Assassination. To have papers from one of the most notable events in American history makes you pause and put everything into perspective. 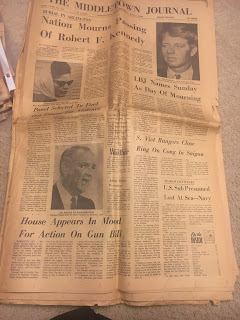 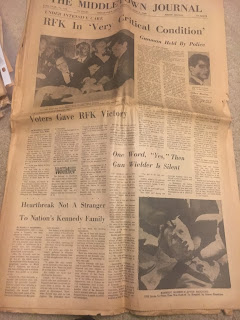 The small package I found contained these, newspapers from the RFK Assassination. The top paper announces his death while the bottom paper states he's in "very critical condition". I must say too that the picture at the lower right is rather disturbing as the caption states it was taken right after he was shot. As I mentioned, the remainder of the envelope had clippings from the JFK assassination. These were still nice and neat in 1-pocket pages. So neat, in fact, that I'm considering putting them into a three-ring binder.

Thanks for taking traveling back through time with me as I explored this time capsule. Now it's time to seal it back up and give it back to my mom for safe keeping in her closet and I really don't have room for all of this.

It's back to cards later this week.
Posted by Adam at 8:31 PM