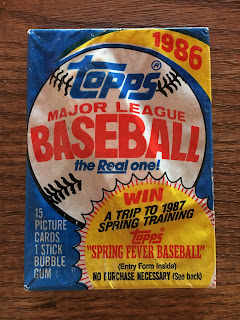 1986 Topps seems to be one of those polarizing sets, either you love it or you hate it. There's no in between. Personally, I like it. I'm considering building a set at some point but that's going to be a project I won't even consider until I finish off the 1984 set and I get some solid progress on the 1993 Donruss set.

This particular pack was one of the packs I picked up from the 50 cent bin at the card show back in March and one of the ones I was most excited to open up. Unlike last time, I'm not going to go through each player individually, instead, I'll just hit some thoughts and highlights. Enough talking, let's rip.

One of the things I really like about cards from the mid to late 1980s is the fact that star players of the 1970s and even the late-60s still have cards. Take Vida Blue for example, his rookie year was 1969 with the A's and he wrapped up his career with the Giants in 1986. While the card here isn't a sunset card (that would come in the 1987 sets), it's still cool to get a card of a big star of the 70s.

Let's take a moment and talk about the design. I really like the simplicity of it, with the name at the bottom, the players position in a little circle and the black and white border. The team name is in really big letters with the font color matching the team name. To me, it all just works. I know there are some who may not like the design and the giant block lettering might turn up a few noses but I think it's one of the better looking sets of the mid 80s. This trio yielded a new Eckersley for the PC and one of him with the Cubs no less. Ivan DeJesus's son was a utility player for the Reds last year and was a good fill in when necessary.

Mario Ramirez retired after the 1985 season so I guess this could be considered his sunset cart. Armas is probably the best known of this trio, amassing a 14-year career for the Pirates, A's, Red Sox, and Angels. His best season stat wise appears to be 1984 where he hit .268/.300/.531 with 43 homers and 123 RBIs.

Bobby Wine only managed the Braves for a partial season in 1985 but somehow he would up with a card in this set. 1985 was the only season he ever managed in the majors. 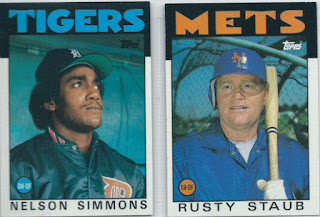 I mentioned earlier about how neat it is to pull out cards of 70s stars in mid-80s packs and Rusty Staub is no exception. This his sunset card after wrapping it up during the 1985 season and he's pictured here by the batting cages, exerting what smile he can.

There was one other card in this pack, #394 John Russell, but it was so horribly warped and mangled by 30-year old moldy chewing gum that it was unsalvageable. Aside from the horrible science experiment growing on the gum, this was a fun rip. I've got another pack of 86 Topps coming soon, this time of the cello pack variety so hopefully there won't be any duplicates. I'm keeping only a handful of these though, the rest will wind up either in the trade box or the donation box.