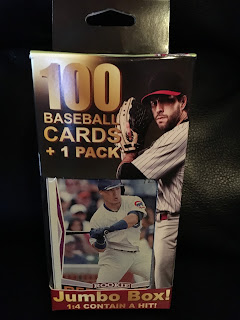 I was at the local Walgreens a while back grabbing some odds and ends and decided to take a gander at the toy aisle. As usual, they had a few repacks hanging from the shelf. The temptation was too strong so I grabbed one and just had to bring it home. Since it's been a while since I've done one of these, spring to be exact, I figured with the Christmas season upon us, now would be a good time to see what the cardboard gods gift me in this retail repack. 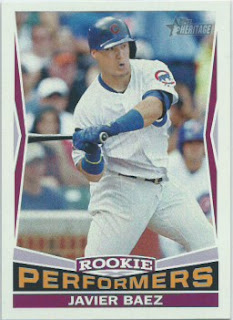 Our cover card, a nice 2015 Topps Heritage Rookie Performers insert of Javier Baez. I'll gladly take that to start off with. Sorry Cubs fans, I'm keeping this one. 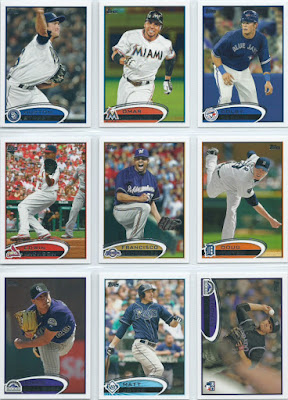 These repacks certainly do like 2012 Topps. Interestingly there were two Thomas Field cards (he's the Rockie card in the bottom right) in the middle of the package right on top of each other.

Some 90s stars. 1995 Leaf is a pretty foil-y and unreadable set. Don't get me wrong, I like the design, especially the diamond in the upper left with a profile shot, but do we really need all that foil? It makes the names completely unreadable. Hey, this is pretty cool. A 1991 Topps Rookies Larry Walker card. Even though my Expos collection is now primarily focused on pre-1987 cards, this will make for a nice addition. This was the last year that Topps produced the Rookies subset. 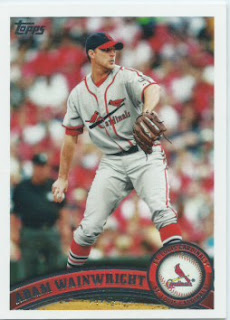 Here's a card that goes into a new collection, that being throwback uniforms. I've always like cards featuring players in old school uniforms, no matter the sport, so I'll be on the lookout for these when perusing dime and quarter boxes. 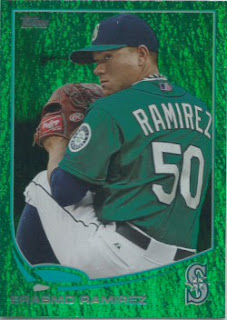 Hey look, a very green parallel card of Erasmo Ramirez, whose name is nearly erased from all the green in this card. Repacks are all about randomness, so what could be more random than three mid-90s catching prospects, only one of which I've heard of. For some fun, let's review the careers (with the help of Baseball Reference) of the three catchers who share this card.

First up, Kevin Brown who played in a handful of games over the 1996 and 1997 seasons with the Rangers before being dealt to Toronto. With the Blue Jays in 1998, he saw action in 52 games and hit .264 with two homers and 15 RBIs. After that season, he never appeared in more that 17 games in any one season and bounced around from the Blue Jays to the Brewers and two final games with the Red Sox in 2002.

Next, there's Ben Davis who spent 7 years in the bigs, mostly with the Padres. His most prolific season was 2001 playing in 138 games with a .227 average, 11 HRs, and 57 RBIs. Most of his career though was spent as a serviceable back-up catcher with the Padres, White Sox, and finishing up with the Mariners in 2004.

Finally, the most notable of the batch and that's Bobby Estalella, who played 9 years in the majors most notably with the Phillies and the Giants, but also spent time with the Yankees, Rockies, Diamondbacks, and Blue Jays. Like his counterparts on this card, he was a mostly a backup catcher but landed a starting role with the Giants in 2000 hitting .234 with 14 home runs and 53 RBIs in 106 games. 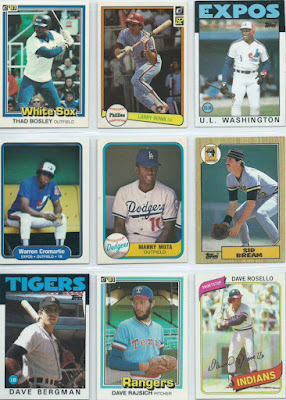 I love the 80s ... especially 80s cardboard. Plus, who can go wrong with Thad Bosley in the White Sox softball uniforms, an early Donruss card of Larry Bowa, and an old-school Indians card. The rest of these are just icing on the cake. 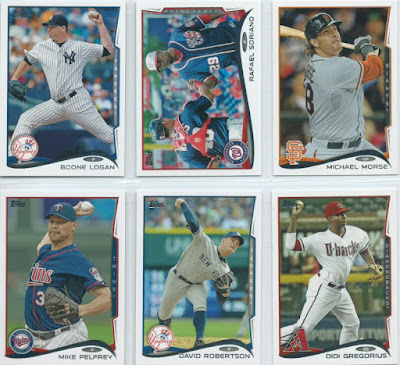 Along with the 2012 Topps I mentioned earlier, there was a handful of 2014 Topps as well. These were the best of the batch. I always get 2013 and 2014 confused as the designs look nearly identical. Side note, I really dig the uniform on the Rafael Soriano card. 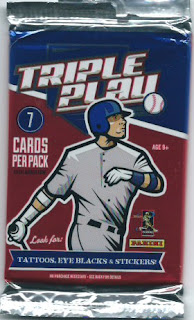 Lastly, there was a pack of Triple Play that was probably acquired for a song. I was tempted to not even open in and throw it in some random trade package but my curiosity got the best of me and I figured I could give the cards to my three year old son. Then I found this ... I guess this would be classified as a hit? I'm not sure but I know I've never seen anyone pull a card like this from a Triple Play pack. Then again, not many people are opening packs of Triple Play these days. They're mostly thrown on the scrap heap with packs of 1990 Donruss and any other unwanted junk wax cards. I'll give this card to my son, I think he'll enjoy it.

This wasn't the best repack ever but it was still fun to open regardless. I've got the itch now so I might have to grab another one of these next time I make a run to Walgreens.