Another weekend has come and gone, and unfortunately since I was so busy, I didn't have time to scan in the cards I was wanting to write about. Instead, I updated my want list, as you can clearly see here. I've decided along with some of the individual players and other stuff I have listed, that I'm going to start getting back into set building. 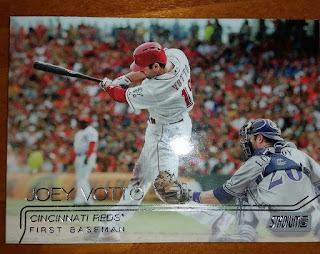 The first set I've decided to start is this year's Stadium Club. Since I recently wrote about the box I bought, I figured that'd be a good place to start for a current set, as I'd say at least half the set came in the box. Now, I will have to get duplicates of the Reds cards that I already have as those are safely tucked away in my Reds binder. That shouldn't really be a problem though as singles should be able to be had for relatively cheap. I've already got the Bryant and the Pederson rookie cards, so I think that the only other major challenges will be finding the Ken Griffey Jr. and Dennis Eckersley cards.

I picked out five 80's sets to work on as well.

I saw an article recently about set collecting and it recommended a good place to start would be the set from the year you were born (in this case 1984). So I'll be working on 1984 Topps and 1984 Donruss since those were the two big sets that year. These will be pretty much from scratch as I know I don't have any 84 Donruss cards and I have less than ten 84 Topps cards. To add to that, I decided to build the sets from the year my wife was born (1982). Again, Topps and Donruss were the big two and again I know I don't have any 82 Donruss cards and only a handful of 82 Topps.

Finally, after reading an article on Sports Collectors Daily about 1980 Topps and how that was the last set before everyone and their brother started producing cards, I've decided to take that on as well. I've already got a decent start on it with about 25 or so random singles.

The next few weeks will be spent building my checklists for each set so look for individual pages for each to start popping up on the blog. If anyone has any spare singles for these you'd like to throw my way (especially the Donruss) let me know and I can probably find some stuff to send back via trade.
Posted by Adam at 10:35 PM