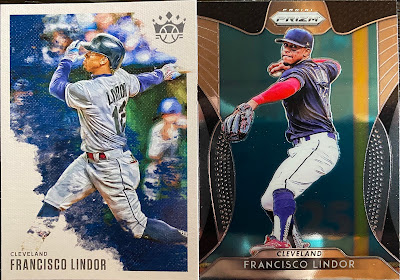 Getting cards in the mail in nice.
It's also nice when said cards are from longtime trade pal and blog reader Julie when she does her famous "pick pockets" grab bag on her blog.
Her most recent one was over the holidays (that feels like forever ago) and I got in on the tail end of the action as I just came back into the card and card blogging universe at the time. I was lucky enough to nab the pair of Francisco Lindor cards above to add to my Indians collection (side note: it's gonna be weird to see him in a Mets uniform in 2021) but those weren't the only cool pair of cards I picked out. 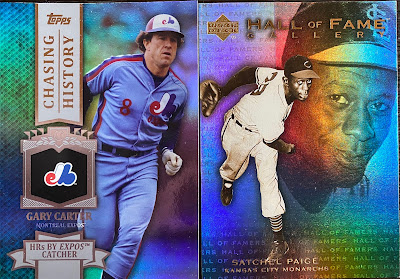 I also got a pair of these shiny cards of some Hall of Famers. Not only do these fit into the Hall of Famers category that I collect, they also fit into the defunct teams category as well. Both of these cards have interesting attributes and not just because they're shiny. The Gary Carter card proudly displays itself as an Expos card, complete with the old-school blue uniform and red and white batting helmet. The Satchel Paige card mentions him with three different teams on the front. The background picture is him with a St. Louis Browns hat, the foreground photos is him in an Indians uniform, and at the bottom it lists him as a member of the Kansas City Monarchs. 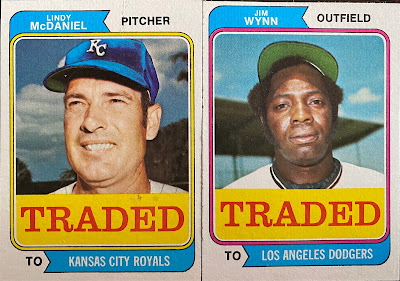 Neither of these two look exactly thrilled but I couldn't pass up this pair of 1974 Traded cards that were offered up. Let's look at each trade here...
Lindy McDaniel was traded from the Yankees to the Royals on December 7, 1973 for Lou Piniella and Ken Wright. Lindy's last two years in the bigs were 1974 and 1975. In those two seasons for the Royals, he appeared in 78 games, primarily as a reliever, and went 6-5 with a 3.75 ERA. Meanwhile, Piniella would spend the next ten seasons in pinstripes (and several more after that as a manager) and Ken Wright pitched in all of three games for the Yankees in 1974.
As far as Jimmy Wynn goes, he was shipped off from the Astros to the Dodgers the day before the Lindy McDaniel trade for Claude Osteen and minor leaguer David Culpepper.Wynn only played two seasons for the Dodgers (1974 and 1975) becoming an All-Star in both seasons and finishing in the top five of NL MVP votes in '74. In Houston, Osteen didn't even make it the full season before being flipped to the Cardinals in August of 1974 for the dreaded "player to be named later" Fun fact, did you know that both principles in the deal, Wynn and Osteen, were both signed by the Reds as amateur free agents? 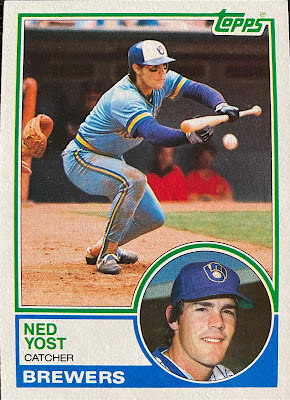 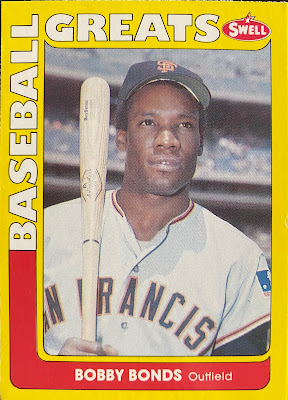 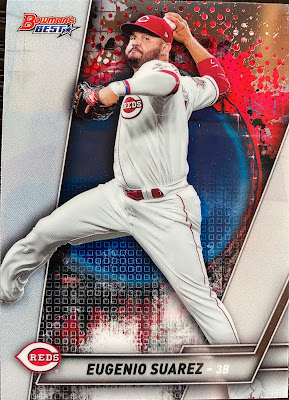 Pairs weren't the only things I picked out from the pick pockets. I also grabbed this trio of interesting cards. Is there anything that these three cards have in common? Not really aside from the fact I thought they were neat. The Ned Yost card I grabbed just because it's an early 80s Topps card, Bobby Bonds because it's an oddball, and Eugenio Suarez because ... well, it's just a neat card!
I was pretty happy to add all of these to my collection and thanks to Julie for doing the pick pockets thing! I look forward to participating in the next round.
Posted by Adam at 7:50 PM