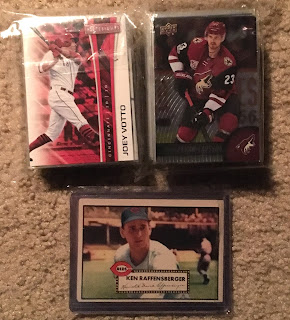 I had to jump on the COMC Black Friday sale bandwagon. I placed my order and patiently waited for my cards to arrive. When they arrived, my wife intercepted them and wrapped them up as a Christmas present, which was kind of the plan all along. So when I opened them on Christmas Day, it was new to me as I'd almost forgotten most of what I'd ordered. 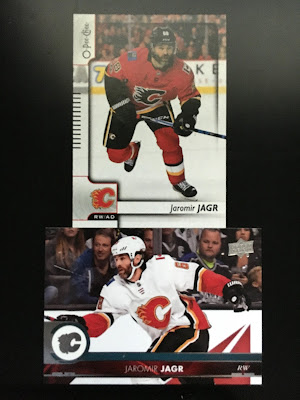 Since it's currently hockey season, it feels right to start with the hockey cards I ordered. First, there are these two cards documenting Jaromir Jagr's brief run with Calgary last season. I can scratch the Upper Deck one off my wantlist now. 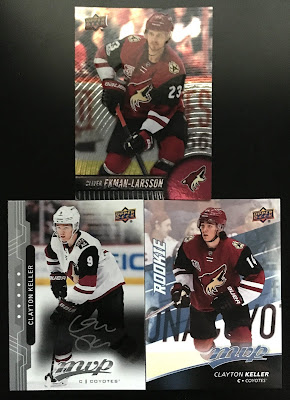 Clayton Keller and Oliver Ekman-Larsson are the two young studs anchoring the Coyotes out in the desert currently. I didn't have any cards of either player so I just had to grab these. The Ekman-Larsson card is a Tim Horton's exclusive. 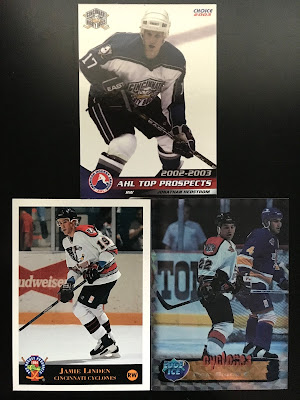 When I get hockey cards from COMC, I always try to get a few cards of local teams, past and present. The top card is Jonathan Hedstrom as is my first official Cincinnati Mighty Ducks card. The other two are old school Cincinnati Cyclones cards. The "Edge Ice" one is hard to read but it's Don Biggs, one of the few players to have their jersey retired by the team. 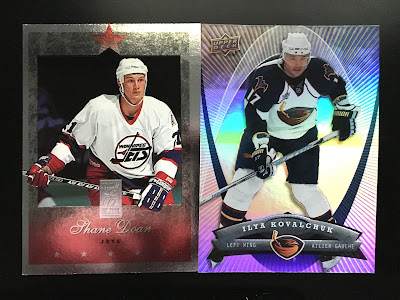 I'm a big fan of shiny cards so I couldn't resist these. Kovalchuk is actually a 2008-09 Upper Deck McDonalds card issued in Canada. 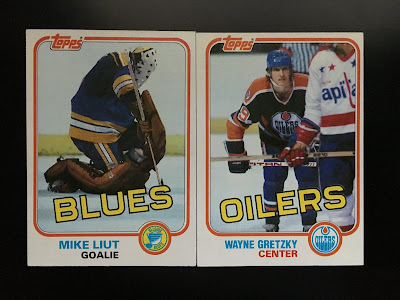 I'm a sucker for old school hockey cards and these I couldn't resist. I really like the design of the 1981-82 Topps hockey set. It's not one I'm going to build but I'm going to try to find some of the star players and fan favorites from this set. I picked up the Mike Liut card as well as he's a former Cincinnati Stingers goalie. 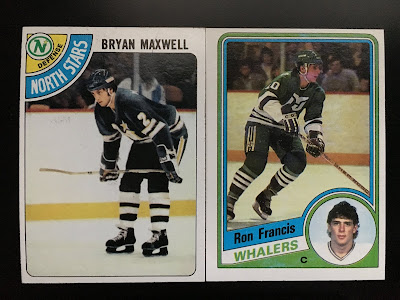 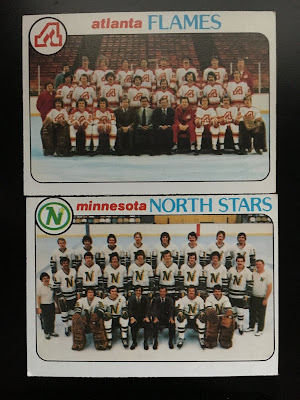 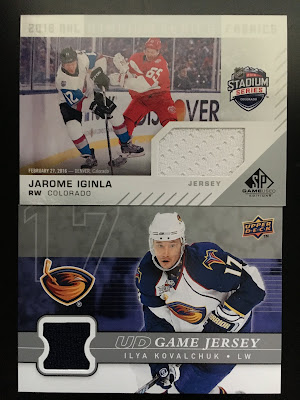 And to cap off the hockey section, here's a couple jersey cards that I couldn't pass up for just over a buck each. The Jerome Iginla card is from the 2016 Stadium Series game between Colorado and Detroit. Also, I can't pass up a card from a defunct team and that's exactly what the Ilya Kovalchuk card is. 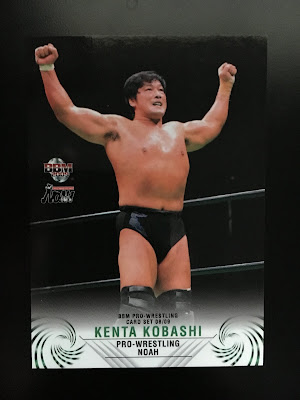 Kenta Kobashi is my all-time favorite Japanese pro wrestler. His match against Samoa Joe with Ring of Honor in 2005 in an absolute classic and was the match that got me interested in Japanese wrestling. Kobashi was one of the best, racking up championships in All Japan Pro Wrestling and the subsequent off-shoot promotion, Pro Wrestling NOAH. He retired in 2013, with age and injury being a factor in his retirement. My two favorite Kobashi matches ever are the ones he had at the Tokyo Dome in the mid-2000s. The first was against Jun Akiyama in 2004 in one of the most hard-hitting matches I've ever seen, and the other against Kensuke Sasaki the next year in an insane and brutal match. 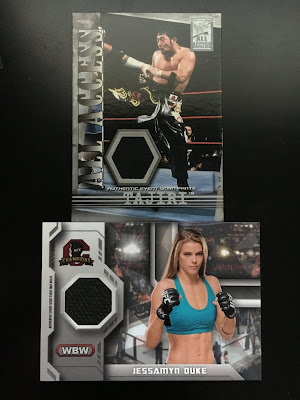 I also grabbed a few cheap relic cards from pro wrestling and MMA because, well, why not? Tajiri, nicknamed the "Japanese Buzzsaw", was a favorite of mine during the dying days of ECW where he teamed with Mikey Whipwreck and was managed by the Sinister Minister. I also couldn't resist a cheap relic card of my fourth cousin Jessamyn Duke. 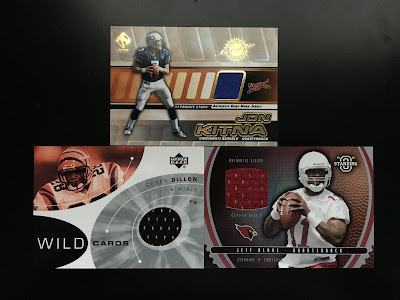 I only grabbed a handful of football cards and they were relic cards at that. I find the Jon Kitna card interesting because he's advertised as a member of the Bengals, but yet the relic swatch is blue. 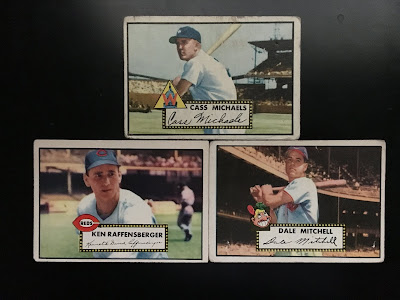 On to what everyone has probably come here for, the baseball content. I'll start with these absolutely beautiful 1952 Topps cards. For early Topps cards, especially 1952, condition and corner wear doesn't bother me at all. They're cards from 1952, they are supposed to be a little beat up and have some road miles on them! Anyway, I nabbed these three because of the artwork on them. Raffensberger represents my first 1952 Reds card. 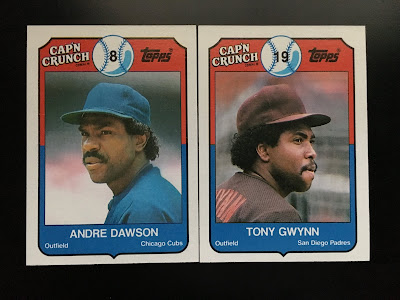 Yay for oddballs! I got the Cap'n Crunch Tony Gwynn card in my secret Santa package as well from Andy so now I have two of it. 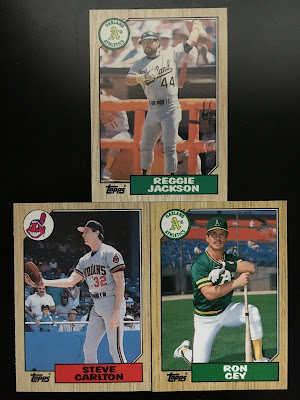 Here are three cards from the 1987 Topps Traded set I've been after for a while. Reggie Jackson looks normal in an Oakland uniform but Carlton and Cey look completely out of place, especially Cey. 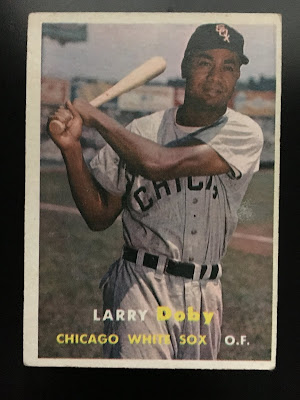 Whenever I buy from COMC, I'm always on the lookout for decently priced vintage and that's exactly what this 1957 Topps Larry Doby is. Doby spent the last few years of his career on the South Side, appearing in 280 games for the Sox over parts of three seasons (1956, 1957, 1959). He was part of two pennant winners in Cleveland and even played 21 games for the famous "Go-Go Sox" in 1959 but wasn't on the postseason roster. 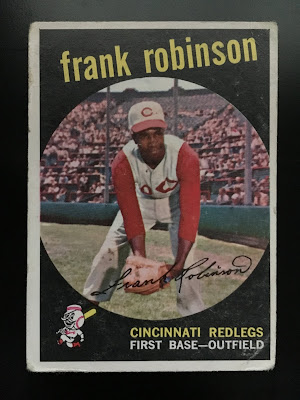 This is a beauty of a 1959 Topps card and something that would probably go for a pretty penny out here in my area. While the 1959 design isn't my favorite ever, this is a great card. Just look at the background with the bleachers, and the sleeveless uniform as well. Plus the black on the card compliments the red on the photo as well. 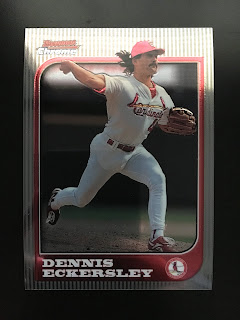 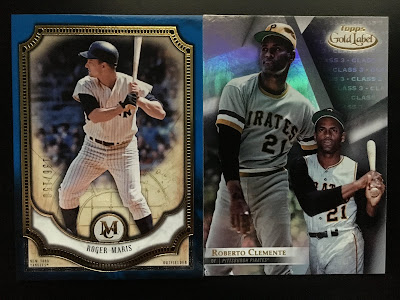 I don't buy any high-end packs or boxes when they come out but singles I'll gladly pick up. 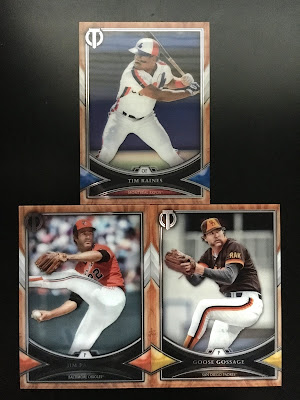 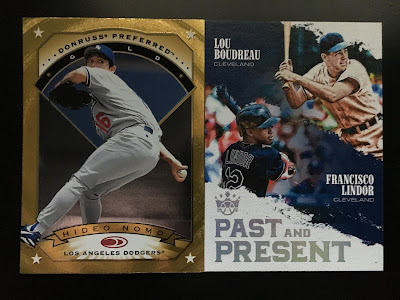 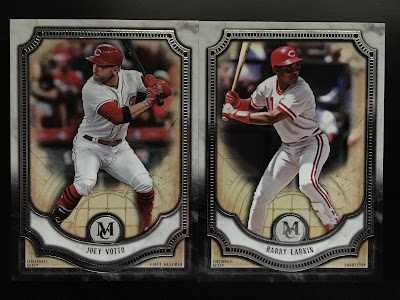 Finally, I'll end this with the Reds cards I picked up. I got these really nice Museum Collection singles. Since these are thicker that normal cards, they'll probably stay in the penny sleeves that they came in. 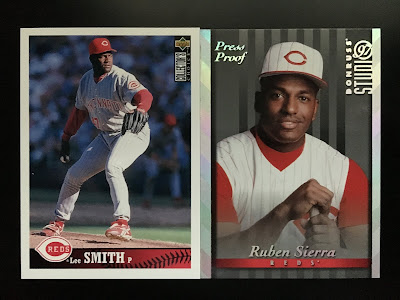 Lee Smith and Ruben Sierra were two well traveled veterans who landed with the Reds in the late 90s. Smith was acquired by the Reds on Memorial Day 1996 from the Angels in exchange for Chuck McElroy. He appeared in 43 games over the rest of the season, going 3-4 with a 4.06 ERA and earning two saves. Sierra only appeared in 25 games for the Reds during the early part of the 1997 season before being let go in May. Over those games, he hit. 244 with 2 homers and 7 RBIs. 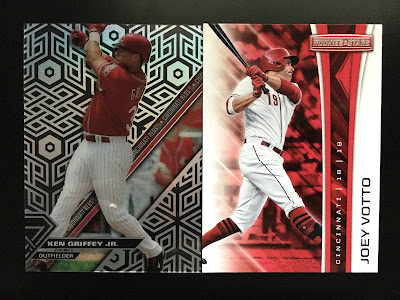 And here are two cool cards I just couldn't pass up. The Griffey is from Topps High Tek, which is one of those late season releases I never pick up. It's a really cool card though. The Votto is from 2018 Panini Chronicles and it's such a nice card, I didn't even notice until just now that there were no logos.