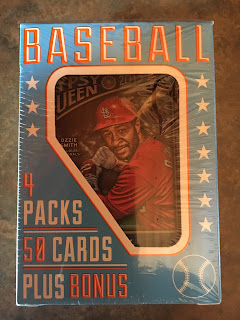 When it comes to buying retail, I've definitely been better than I was last year. I've bought zero blasters, hanger boxes, and the like so far but these little repacks though are addicting. As I mentioned in the first repack, for eight bucks (well, $7.99 to be exact) you get four packs, a 50-card mini box, and a bonus prize. Not a bad deal if you ask me, especially considering I've been sitting on this since Christmas. 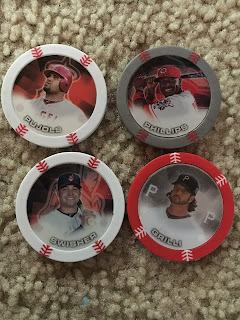 Here's the bonus prize of this package, four Topps poker chips. I don't play poker but these are neat little oddballs if you will. 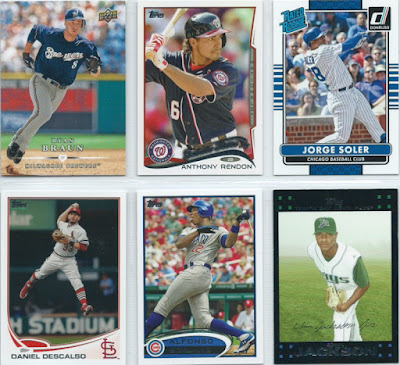 Unfortunately, most of the cards in the mini-box were a dud. These were the best that I could scrounge up. Good to see a Jorge Soler Rated Rookie card but the winner of this batch is the Edwin Jackson Devil Rays card. Its a tad creepy looking with the fog coming in from behind and he seems completely unaware. 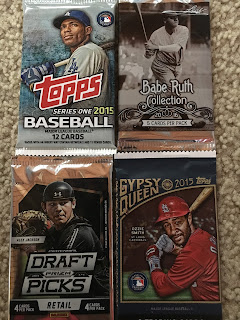 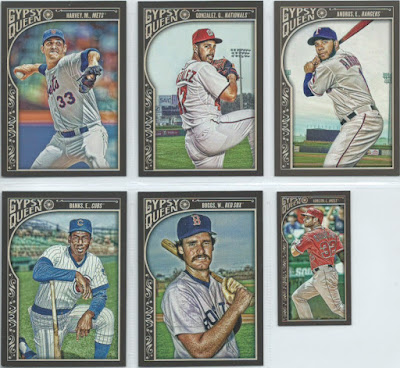 The contents of the Gypsy Queen pack. My favorite design of Gypsy Queen the past few years is definitely 2015. I love the brown borders, how the picture has a little bump in the top left, and the pictures themselves are really, really good. Case in point, the Ernie Banks card with him leaning on a bat in a somewhat empty stadium. I'm also starting to have more appreciation for the tobacco cards. Normally, I'd scoff at them and just put them in the trade box but I think these might become a little off and on side project now that I've gained a bit more appreciation for them.

These were the only thing worth salvaging from the Series 1 pack. 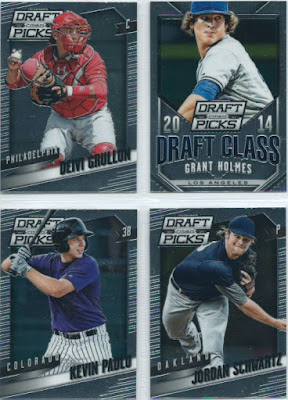 Finally here are the four cards from the Prizm Draft Picks pack. I might save one or two of these (more than likely the Grant Holmes Draft Class card) and set them aside for when I start my "shiny cards" mini collection. The rest will end up in trade packs.

You may have noticed that I didn't show any of the Babe Ruth cards, that's because I opened the pack and truthfully found nothing worth sharing. Not to worry though, I know a good home for them and they're already packed up.

This repack definitely wasn't as good as the last one but there's no way honestly the first one could have been topped. Even though it wasn't that great, I'm still going to grab some more of these when I feel like having something to tear into.