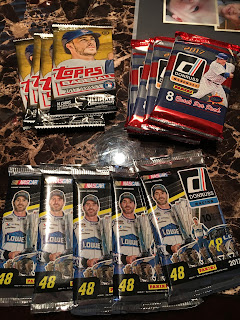 As you saw in my previous post, last weekend I attended the card show at the Nutter Center. However, that wasn't the only card related thing I did. After the show, I headed over to TCI Sports Fan, a card shop I've written about before in my "Card Shop Chronicles" series, that was about 10 minutes down the highway from the venue. I had my mind set on getting some newer packs to rip since I figured it would be my only opportunity to do so for a while but there were some other very specific cards I was looking for as well.

Last year when I went to the Horrorhound Convention, I grabbed a pack of the Topps Fright Flicks cards from 1988. Since then, I haven't seen hide nor hair of those anywhere so I figured if anyone would have them, it would be TCI, since they literally have every sort of sports or non-sports trading card (except for gaming cards) available. I asked at the desk if they had any and Terry, the great guy who runs the shop, winced a bit and said he remembered having some but wasn't sure if he did anymore. He pointed me in the direction of display case that had the bottom filled with 25 cent non-sport boxes. He said if there were any, they would be there. I took a gander and it didn't take long for me to find them. There were a bunch of duplicates but I did manage to grab eight new cards for the set I'm building. 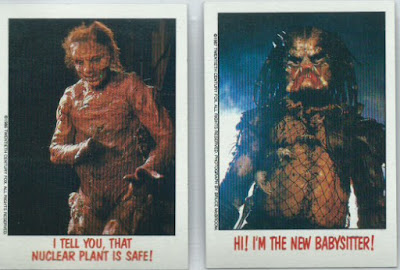 Most of these are from the Nightmare on Elm Street films but there are cards here from other films such as Predator, The Fly, Alien, and Fright Night. I'm not particularly one for gross out creature feature films like The Fly but they are a necessary evil in a set like this. I'm more for the suspense/thriller/slasher type films like Nightmare on Elm Street, Halloween, etc. The other attraction for this set is that this is the only set (well, until last year) that had cards from the original Ghostbusters movie. Unfortunately, there weren't any of the Ghostbusters cards from the set to be had in the box I found. Perhaps I'll dig a little deeper next time I stop in. I have a feeling though that those are going to be the toughest part of completing the set.

Fright Flicks cards weren't the only thing I was after though. 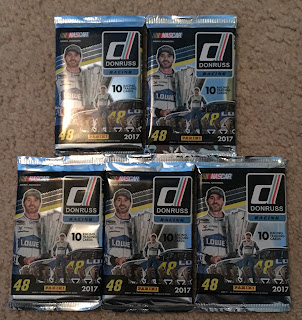 My main reason for heading to the shop was to get some packs of some current stuff to tear into. One of the things I really wanted was some 2017 Donruss racing. Now, I'm not really into watching NASCAR but I saw the Beckett Box Busters video of this and thought it would be pretty fun to get. Plus, it's always good to spice things up with a bit of variety. I'll share how I did with these in a future post. 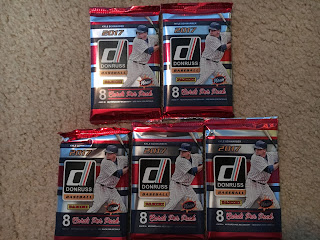 Also coming in a future post will be these packs of Donruss baseball. Even though Panini doesn't have the MLB license, I still enjoy the Donruss cards as you get a lot of fun stuff for a decent price. As of this writing, I haven't torn into these but stay close. I did pretty well when I bought some Donruss on a whim last year so perhaps my luck with this will continue. 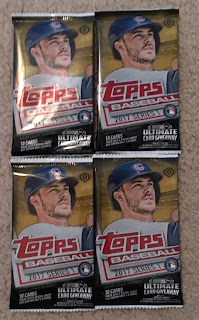 Finally, since they were completely out of Heritage, I picked up four more packs of Series 1. While I've already opened ten packs of this, it never hurts to pick up some more. Plus, I really like the cards this year. I'll share these in a separate post as well. Since I bought so many packs, the shop owner was nice enough to throw in the Fright Flicks cards for free without me having to even ask.

And thus, another fun trip to the card shop concludes. Speaking of card shops though, while I was at the card show, there was a vendor there from a new shop (well, new to me). I plan on checking the place out this weekend and who knows, I might find something fun.
Posted by Adam at 9:05 PM