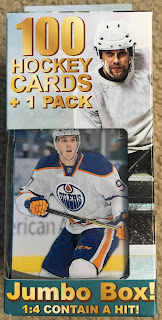 There is one Target in my area that for some reason always, and I mean always, carries a plethora of hockey cards. I'm not sure why this one particular Target is like that but I'm not going to complain. It's also the only place where I see these hockey repack boxes. These are just like the baseball boxes, a brick of 100 cards and a random pack. The pack I'll save for a rainy day but everything else in here is fair game. I've never opened one of these with hockey cards so I'm pretty excited. 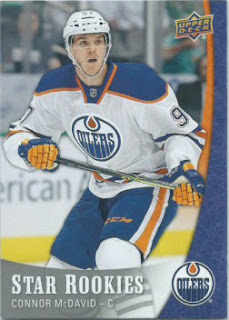 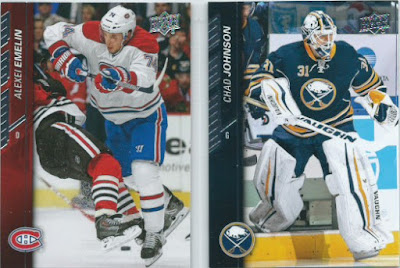 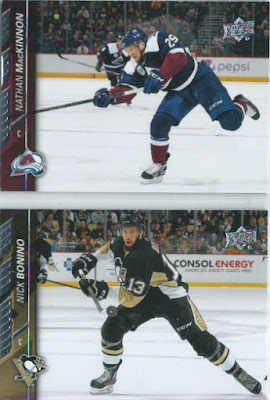 Speaking of 2015-16 cards, these Upper Deck cards were scattered throughout the box. I guess they're the equivalent to the 2014 Topps cards in the baseball packs. These four are the best of the batch.

I'll admit, these cards scanned like utter crap. I tried everything I could to clean them up and contemplated taking them off of here completely but I wanted to keep them so I could show the variety. Since the names on the cards are unreadable, I'll let you know who we've got here ... Dan Brown of the Chicago Wolves, David Ling of the Saint John Flames, and Matt Johnson of the Phoenix Roadrunners. In person, the cards themselves are pretty cool minor league hockey additions to my collection.

Here's a few cards from the mid-90s of stuff that's all over the map. I think my favorite of this batch is the Doug Weight card in the middle.

As is the case with any sort of repack, it was littered with cards from the early 90s. I bought a set of 1990 Score at a card show once for three bucks, then I decided to break it as the only thing I really wanted from it was the Brodeur rookie card. I don't have too many Fleer Ultra hockey cards either and the design translates really well from baseball to hockey. 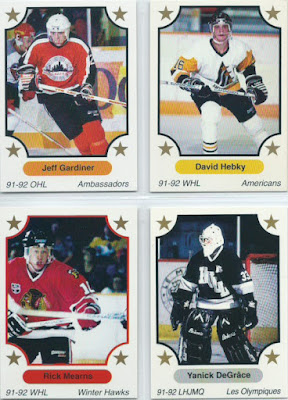 These are interesting. For the 1991-92 season, a company called 7th Inning Sketch made cards for the leagues and teams under the Canadian Hockey League umbrella. I've never seen these cards before, nor did I have any idea that they even existed. None of the four shown here ever made it to the NHL unfortunately. 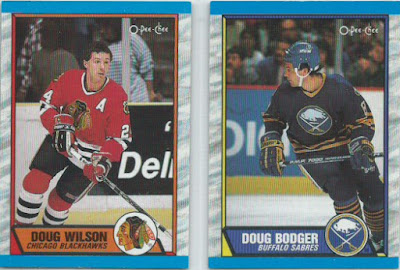 No repack is complete without cards from the late 80s as well. I feel like hockey cards from this time get a bad rap and get lumped in with everything else in the "junk wax" stuff and get forgotten about completely. It's probably because hockey cards, although mass produced, weren't as readily available in most areas as, say, Topps baseball cards or NBA Hoops cards. These cards above are part of the 1989-90 O-Pee-Chee set and have a really clean, nice look to them. I might have to track some more of these down. 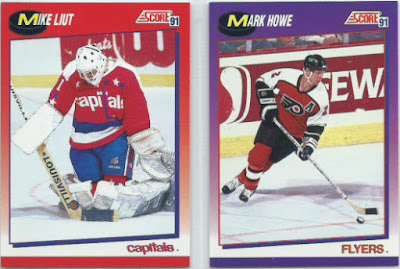 The 1991 Score set was well represented too with these former WHA players. Aside from these two plus Gretzky and Messier during this period, I can't think of any other WHA players that were still hanging around.  These cards also gave me an idea for a series of blog posts comparing designs of baseball of hockey cards from this time. That should be fun. 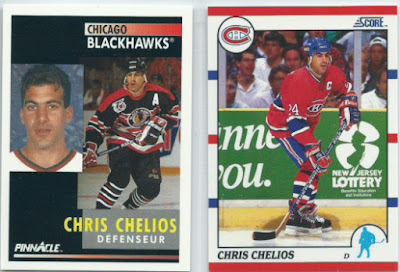 Chris Chelios never was on my list of favorite players or people I collect but since there were two Chelios cards in the box, I guess it could be considered a Chelios "hot box". I know a few Blackhawks collectors so these may get passed along, not sure yet. 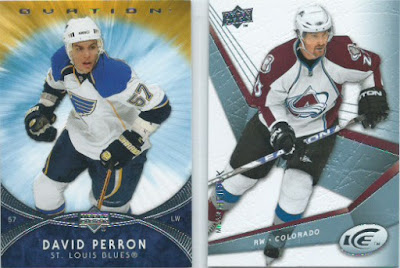 And here are a few newer Upper Deck cards to wrap things up, including a really nice Milan Hedjuk card.

So that's a hockey repack. There were a lot of cards of players I didn't know but overall this was a nice change from the baseball repack bricks. For $4.99 I got a nice mix of cards, especially ones from the 80s and 90s that I don't have in my hockey collection, and about 10 minutes of fun. That's really all you can ask for from one of these. I've got another one of these around the house that I'll be busting into soon.