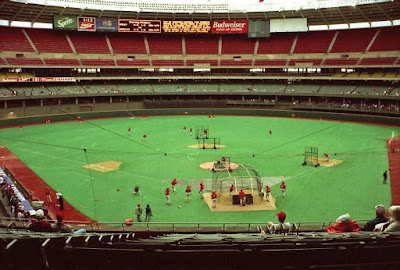 You may have noticed a change around the blog recently, mainly in the background photo. I forget where I found the picture above (I think it was on Twitter) but when I saw it, I thought it was really neat. It's a view of inside old Riverfront Stadium, the place where I saw my first live baseball game. I liked the photo so much that I ended up making it the background of my laptop as well, along with a few other devices I use mainly because every time I see it, it bring back a warm feeling of nostalgia and being a kid again.

A few days ago, I had the thought to see if I was able to find the game or the day on which this picture was taken. Since I couldn't make out any of the players on the field, I had to look other places in the picture for help. First, I noticed that those in the stands had rain gear and ponchos on. That's my first clue, the weather.

Here's a zoomed in portion of the photo focusing on the scoreboard. This is where I had to look to get most of my clues. First, look at the time on the clock. It reads 1:12, therefore telling me this is a day game. Next, look at the records of the pitchers, each one reads 0-0. Another clue is who the pitchers actually are. I know it's terribly hard to read (believe me, I did the best I could to enhance it) but the board to the left of the NBC5 sign reads "Starting Pitchers Smiley vs. Schilling". That's the biggest clue. So far, I've deciphered that it's an early season day game against the Phillies where it was raining. That should be plenty good enough to start some digging on Baseball Reference.

Oh, in case you are wondering, the text on the other scoreboard reads:
City of Cincinnati municipal code prohibits smoking in all seating areas, in restrooms, while in concession stand lines, and in all other posted "no smoking" locations. Stadium guests wishing to smoke may feel free to do so on any of the stadium concourses.

There's a nice little function on Baseball Reference where you can click the team abbreviation (example "CIN" for Cincinnati) next to a particular year and it will pull up the team page from that season. From there, if you click the "Schedule & Results" section, it will give you the results from every game that particular team played that year along with the box score.

Look at Saturday, April 9. The opponent matches up (Phillies), the starting pitchers match up (Smiley and Schilling), time of day matches up (day). I think we have a winner. The last thing to check is the weather at the bottom of the box score:

Bingo! The field condition was "wet" and it was overcast! There it is, this picture was taken on Saturday, April 9, 1994! Just for the heck of it, here's the rest of the box score from that day. 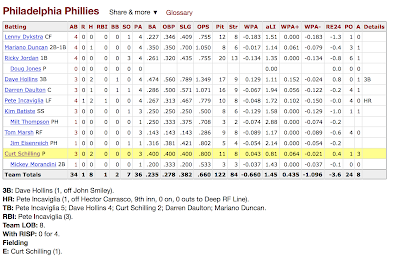 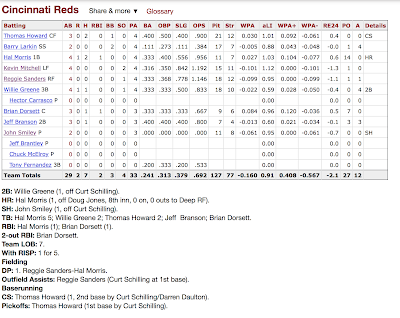 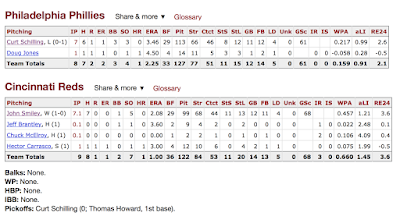 It's nice to see as well that the Reds won that day 2-1. That was their second win in a row as they had also bested the Phillies the prior night in extra innings. The Reds would continue on and ended up with a six-game winning streak, the first of three six-game winning streaks they would have that year. But, as everyone knows, the season abruptly ended in August with the players strike that cancelled the post season and lingered on into the beginnings of the 1995 season. Seeing this photo though, from a game so early in the season, really makes you wonder if the players knew what would lie ahead of them in that oh so troubled season.