A few weeks ago, in the middle of a crazy week at work, I received a surprise mailer from Ryan of the Sumo Cards blog. Apparently, during his travels with Fuji, he'd grabbed a bunch of Reds from a bargain box for me. 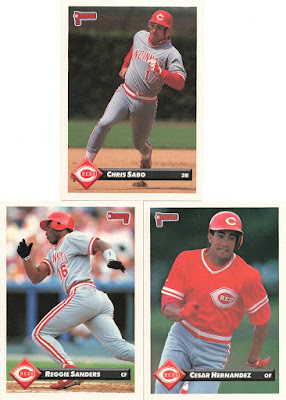 First, a few 1993 Donruss cards. I've always been a fan of 1993 Donruss because of the pretty simple design, although I'm less familiar with series 2 than series 1. The Reggie Sanders and Cesar Hernandez cards are from series 2. I don't recall Hernandez playing with the Reds, turns out he didn't make much of a splash. Just 61 games over parts of two seasons. 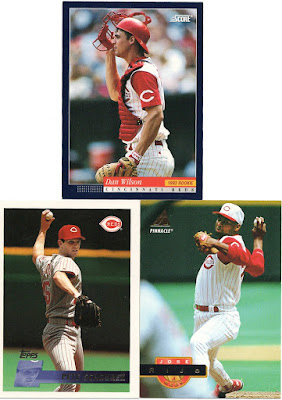 Jose Rijo and Pete Schourek were anchors of the Reds pitching staff in the mid-90s. Although Rijo got injured during the 1995 season, Schourek finished second in Cy Young voting and helmed a staff which also included John Smiley and Tim Pugh. Dave Burba and David Wells were late season additions that propelled the Reds to the NLCS that year. 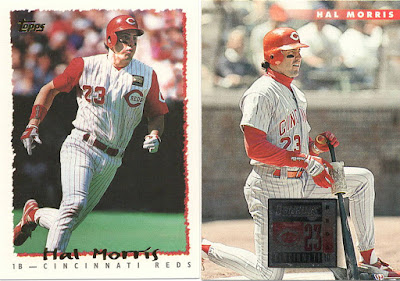 Hal Morris was always one of my childhood favorites and whenever I get cards of his, I'm pretty happy. Plus, I don't have a lot of 1995 Topps, so that's good too. 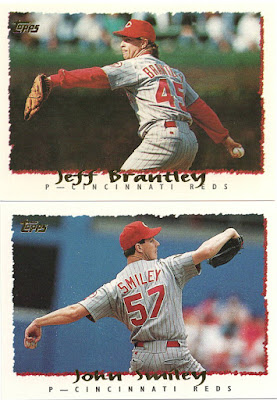 Speaking of 1995 Topps, two of the Reds top pitchers during the mid-90s. Jeff Brantley is now part of the Reds TV and radio broadcast team. John Smiley's last good run was with the Reds. After they traded him to the Indians in July of 1997, he was pretty much done. His career ended with a broken arm/shoulder injury not long after that. 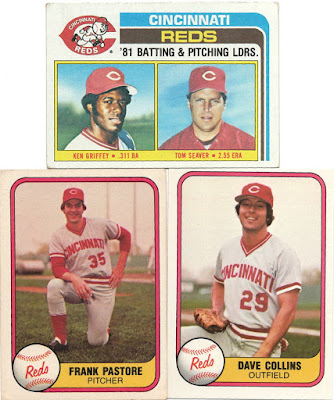 I always enjoy some early 80s cards. The Reds of 1981 were starting to come off the high that was the 1970s "Big Red Machine" but still had some steam left. However, due to the split season, they didn't make the playoffs. 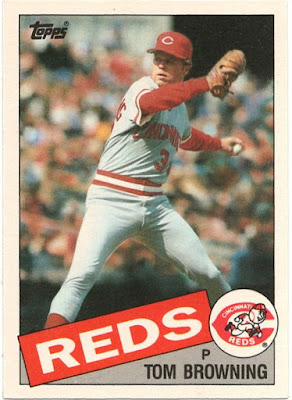 Here's something I wasn't expecting, a Tom Browning rookie from the 1985 Topps Traded set. Browning had an excellent rookie campaign in 1985 going 20-9 with a 3.55 ERA over 38 games. He finished second in Rookie of the Year voting and 6th in Cy Young voting 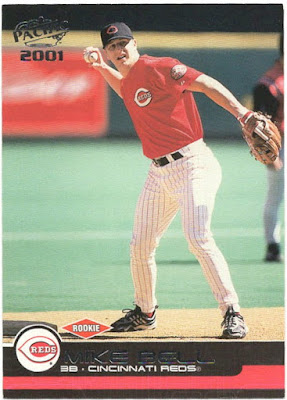 Here's a card of Mike Bell, the brother of current Reds manager David Bell. I'd forgotten Mike Bell ever played for the Reds. 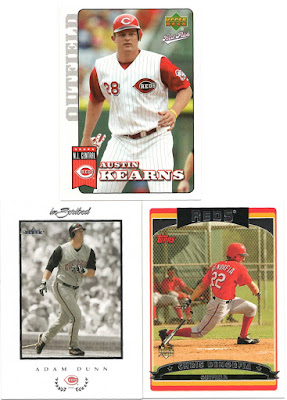 Some mid-2000s action. I really like the Austin Kearns card. I remember the days when Kearns and Adam Dunn were supposed to anchor the Reds teams of the future. 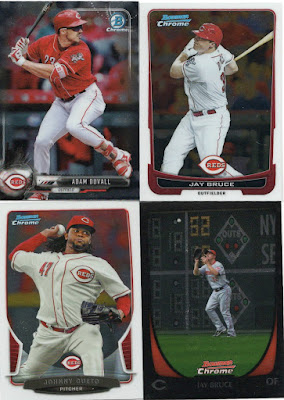 And a few shiny Bowman Chrome cards to close things out with.

Much thanks to Ryan for sending these my way. It was nice to receive a completely unexpected package.