I'd heard rumors of Matt at the Red Cardboard blog doing a mass cleansing of his collection. So I found his blog and those rumors proved to be correct. I found a few cards I was interested in and emailed him. It turns out that most everything I was interested in had been spoken for but there were a few things I'd asked for that were still left. Along with the cards I'd asked about which I'll get to shortly, Matt threw in a ton of extra Reds cards as well. 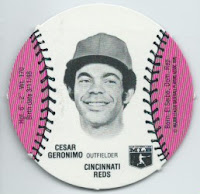 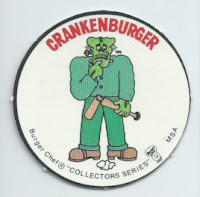 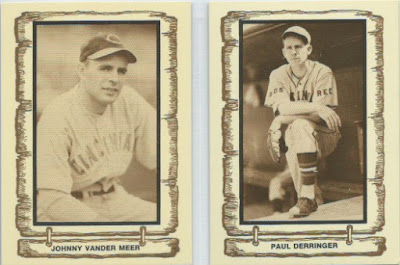 I'll start off with some oddballs. The 1977 Burger Chef Fun Meal disc is one of the more neat pieces of the package. To me there's just something about cards from restaurants and stores that aren't around anymore. To me, they tell an interesting story about the time when they were popular and more importantly, what happened to them? My favorite part though has to be the back with the Frankenstein-esque character "Crankenburger". The Johnny Vander Meer and Paul Derringer cards are from the 1983 Cramer Baseball Legends set. I'm not sure who (or what) Cramer was but these are definitely some neat cards of two of the top Reds pitchers from the late 1930s. 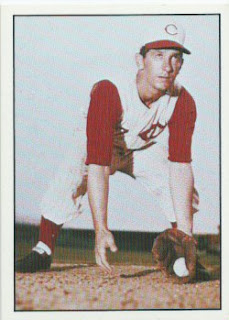 Here's a interesting card from TCMA. If you would've guessed this was anyone but Billy Martin then you would've been wrong. I wasn't even sure who it was when I first looked at it. I'd always read that Martin anchored second base for the Reds in 1960 after being acquired as part of a deal that sent Gordy Coleman to the Indians but I never could find the 1960 Topps card that noted this for a decent price. This card will nicely suffice in its place although I'm adding that 1960 card to my most wanted list. As far as his single season stats for the Reds, he played 103 games, and hit .246/.304/.334 for a Reds squad that finished 6th.

I love early 80s cards, especially those of the Big Red Machine players. Concepcion was the last link to those days for the Reds as he kept playing until 1988.

At first I thought these were just simply Topps cards from the "junk wax" era and I flipped past them because I've seen them dozens of times. On a second glance, these are O-Pee-Chee cards! The giveaway for me was the "Now with ..." text on the Martinez and Power cards. It's always great to add some O-Pee-Chee to my collection. 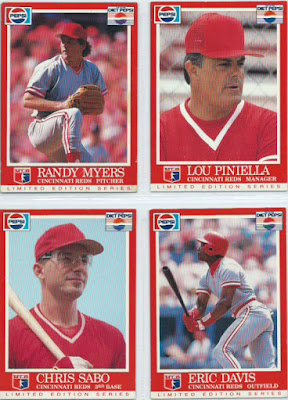 More oddballs, this time of the Pepsi and Diet Pepsi variety. I had a few of these as a kid but I'd forgotten about them until now, plus I get to add a new card to the Sabo collection and that's always a plus. 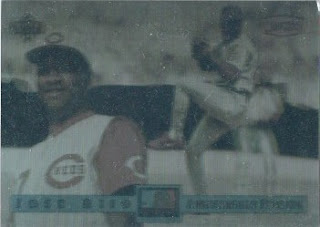 I had really hoped this card would've scanned better but it was not to be. However, this Jose Rijo card was issued by Upper Deck in conjunction with Denny's. The lone Denny's in Dayton closed down a few years ago and has since been demolished. The food was ok the few times I ate there (although I remember the Slamburger being pretty awesome) but going there wasn't about the food as my friends and I would go there late at night after going to wrestling shows across the street at the Montgomery County Fairgrounds and it was just some time for us all to unwind and chill out together. Another card I'd wished would've scanned better was this but it's a Gold Rush card with foil so I sort of expected it. Anyway, this is a perfect shot of Riverfront Stadium from the 90s when the Reds were still hanging in there as far as winning teams go. As a kid going to games, the place was cavernous, having to wind through tunnels to get to the field level seats but I have some good memories there and saw so many games. I even saw my only Bengals game to date there but don't remember much of it. 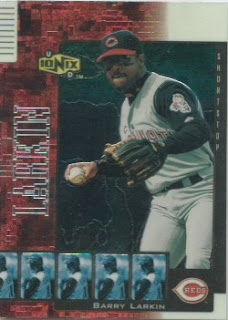 Matt threw in a whole slew of Barry Larkin cards, so many in fact, that it was tough for me to figure out which ones to scan. Instead of scanning a bunch, I figured I'd just scan in one of my favorites. As I've mentioned in prior posts, I don't have a whole lot of late career Larkin cards. Going through all those Larkins and weeding out dupes may take me a while too. 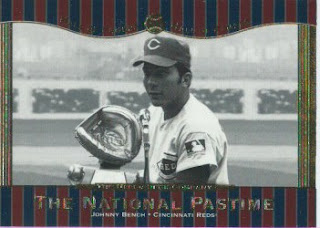 Some early 00s Upper Deck and a really neat card of Johnny Bench accepting his Gold Glove award. Upper Deck made some really good quality cards during this time, too bad they're pretty much nonexistent now. 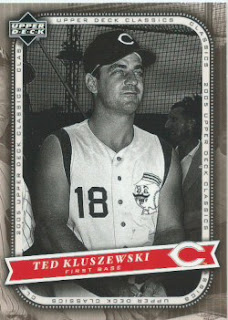 I love this card of Big Klu, everything about it screams "cool card". The way the red stripe blends with the tan border and the black and white photo make it just a mesh of awesome. Plus, it's Big Klu in his trademark sleeveless jersey. How can you get better than that? 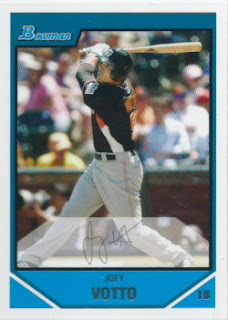 I'm not hip to the whole rookie card thing so if this classifies as a rookie card of Joey Votto then that's super cool. This is easily the earliest card of Votto that I own now. 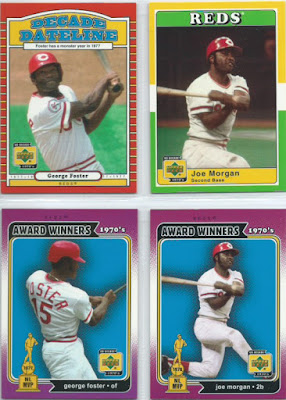 Here's a few more random cards of George Foster and Joe Morgan from the early 2000s from the Upper Deck Decades set. I would love to track down as many more of these as I can as I'm fascinated with baseball and the 70s. Which reminds me, if love this period of baseball check out the book "Big Hair and Plastic Grass". It's easily one of the best baseball books I've ever read. 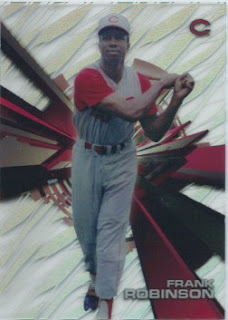 Matt was also nice enough to include more modern cards as well, such as this Frank Robinson. I can't remember exactly what set this is from (perhaps Topps Tek or something like that) but it's nice to see Topps make a card of Robinson as a Red as it seems like he gets more love from the card companies as an Oriole.

Here are three more Votto cards I didn't have. The clear one again looks like it's be an insert from Topps Tek, Topps Fire, or one of those late season releases that I don't pay much interest to. 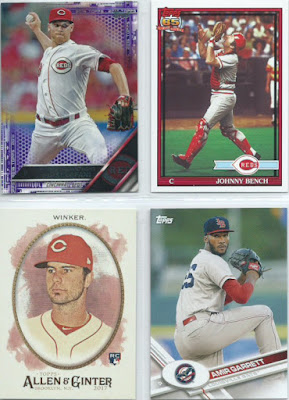 The Reds portion closes with some rookie cards from Heritage high number. Jesse Winker should be in the mix for an outfield spot this season as he was pretty impressive last season in the playing time he did get. 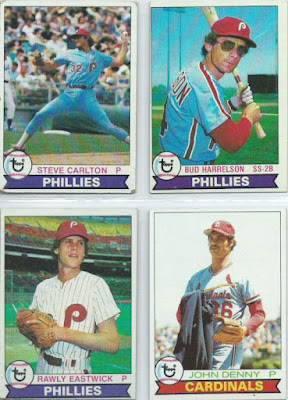 Moving on to the cards that initiated this whole deal. These were all that was left from the 1979 Topps cards that were up for grabs. I'd figured someone would've claimed Steve Carlton but hey, I'll take it.

Starting Lineup cards are always a fun addition to any collection. The Lou Gehrig one is super cool. 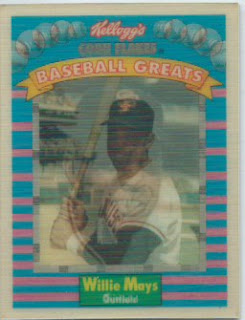 But here's the card I really wanted the most out of the deal, this 1991 Kellogg's Willie Mays. I've had a newfound appreciation for Kellogg's cards over the past few years so I grab them up whenever I can, provided they're in decent shape. Sure it didn't scan all that well but it doesn't matter, it's still an awesome card of a legendary player.