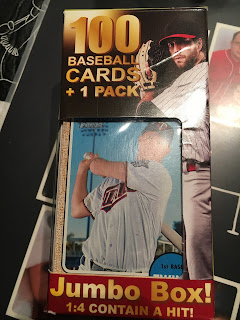 For those not familiar with this series, I grab the Fairfield repacks from local retail establishments (Walgreens and Target) and bust these open and take a look at what's inside. There really is no set goal, aside from a few minutes of fun opening a mystery brick of cards. Since this is a new year and a blog "re-launch" so to speak, not only do I have baseball ones to break into, I've also got a few hockey ones. I figured for this go round, I should go with what I'm familiar with, that being a baseball 100-card brick, before diving headlong some of the other ones. This is the twelfth in a series. 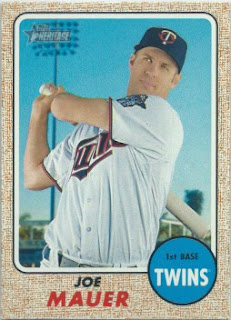 Our cover boy, Joe Mauer. It's interesting to see that 2017 Heritage has already found it's way into these. When that came out last spring, it disappeared from retail shelves almost immediately as everyone and their brother wanted to get their hands on it. Even when the high number set came out last fall, the same thing happened. All this means that I didn't get in on the action as much as I would've liked.

As usual, there was a load of Topps base cards, mainly from 2013 this time around. I didn't feel like scanning all of them but these were my favorites.

I love it when old school Upper Deck makes it's way into these boxes. I really don't have a whole lot of 1990 Upper Deck in my collection so that's a nice addition. Did you happen to notice how empty the stands are behind Dennis Rasmussen? I think my favorite card of the 1991 batch has to be the Tom Foley card, simply because of the Expos powder blue road uniforms.

I've got a factory set of 1992 Topps sitting in my garage I need to sort at some point but this is always a set I've enjoyed, mainly as it's the first Topps set I remember from childhood. 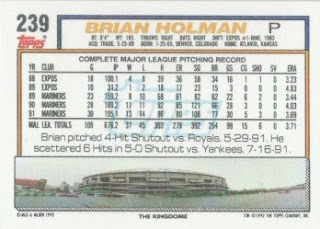 The other thing I always found fascinating with 1992 Topps is the fact they put a picture of the team's home stadium on the back (space permitting). While it never was a great picture, I personally always found it pretty cool to see a picture of a team's stadium on the back of the card, especially when it was a stadium, like the Kingdome for example, that I never saw on TV back then. 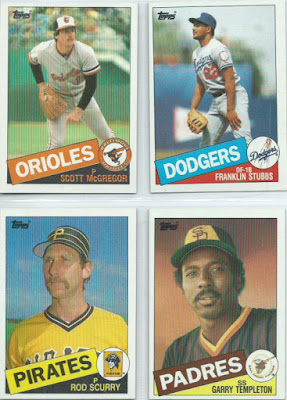 One thing that keeps drawing me back to these repacks is the variety contained within. Sure, there's a bunch of cards from the present day but always buried in the middle are cards from the mid 80s, such as the case with these 1985 Topps cards. I've always liked 85 Topps, dating back to the days as a kid where I bought a lot of them from an antique shop and maybe, one day, I might actually put the set together. Of course, I have to finish 1984 Topps first. 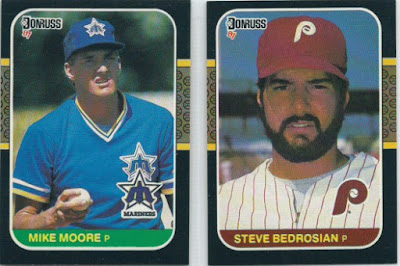 Speaking of 80s cards, here's some from 1987 Donruss. While I really enjoy Donruss sets from the early to mid 80s, after this set things kind of nose dive for a few years. Mike Moore was a pretty decent pitcher for the Mariners in the 80s, his best season coming in 1985 where he finished 10th in Cy Young voting and had a 17-10 record with a 3.46 ERA. Two years later in 1987 though? Not good. He led all of baseball in losses with 19.

Bedrosian was one of the better NL pitchers of the 80s, turning primarily into a reliever when he joined the Phillies. 1987 was an All-Star season for him with 40 saves and winner of the NL Cy Young Award. In four seasons with the Phillies, he posted 103 saves over 287.1 innings and a 3.29 ERA.

Some cards from a few of my favorite sets of the 80s. I think 1981 Donruss gets a bad rap, sure it was hastily produced but it still has a few redeeming qualities such as the general design. If I ever finish off 1984 Topps, my next project might be 1984 Donruss, not sure though but I really do like the design. Also, Mike Smithson may not be the most notable pitcher ever but I really dig the Twins home uniform he's sporting! 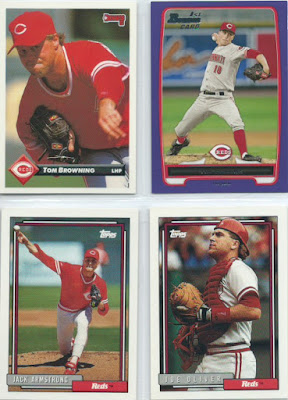 Standard operating procedure with these is that I have to show off any Reds cards included. A bunch of cards here I've seen a million times before and one dude I've never heard of. 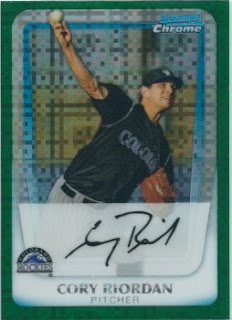 Here's a curiosity, I wasn't expecting a Bowman Chrome refractor to come out of this. It took me a moment as I was thrown off by the facsimile signature but I realized this wasn't the 1-in-4 "hit" that the box proclaimed. Instead, it was a 2011 Bowman Chrome of Cory Riordan, a pitcher who has washed out of the minors with two different organizations and played the 2017 season for the Bridgeport Bluefish of the independent Atlantic League. 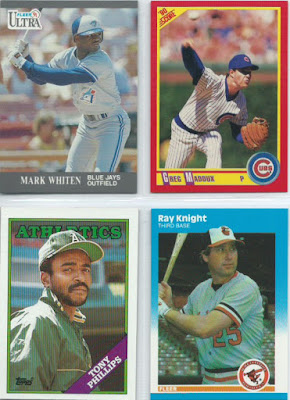 As with any repack, there's bound to be tons of junk wax. Here's the best of what was included. Nice to get a card of "Hard Hittin'"Mark Whiten, who famously slugged four homers in a game against the a Reds team in 1993 that, strangely enough, Ray Knight was a coach for.

Some cards from the mid-90s, including a 1995 Fleer card of Tony Gwynn, as if you couldn't tell what it was by the crazy design. One day, I'm planning on reviewing a card of each design from 1995 Fleer baseball (and maybe even football but I'll have to see what I have stashed away). 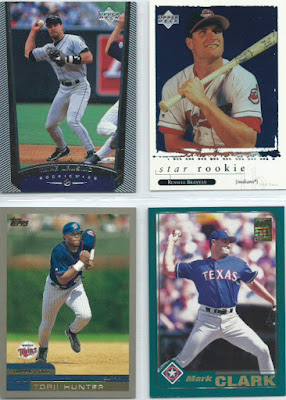 Some late 90s and early 00s miscellany. I always tend to forget what 2001 Topps looks like until I pull an actual card from somewhere.

These are not your average 2016 Topps cards. They are, in fact, cards from the team issue sets. I always seem to come across a lot of team issue cards in these which makes me wonder if perhaps those sets get bought from the manufacturer come season's end at overstock prices? Or do they go buy up team sets from closeout places like Ollie's? It's one of those mysteries of life I suppose.


Speaking of closeouts, that about closes out this repack. I guess I should mention as well that the sealed pack contained within was a pack of 1988 Donruss, something I am less than thrilled to open up. Oh well, I suppose I'll just save that for a rainy day post.