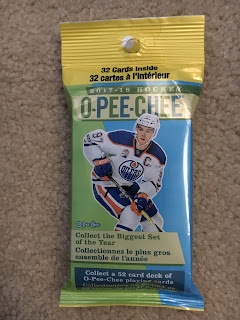 Retail jumbo packs are always fun to rip open. For about five or six bucks (the price of 1 1/2 or 2 packs in the card shop), you get about 30 cards give or take. This particular pack had 32 cards. I debated on whether or not I should've actually bought it while I was in the store as O-Pee-Chee is primarily base cards. I was fearful that if I did get it then I'd be wasting my money as it'd be base cards of players I probably don't know. I know, the moral dilemmas of a card collector. Before I thought too long and hard about it, I threw it in the cart and brought it home. 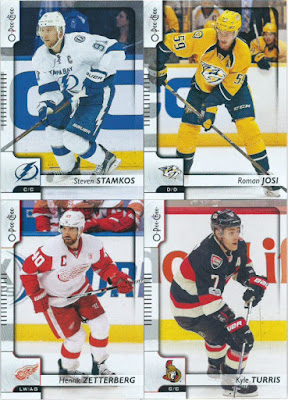 I saw a box break video online recently of the Beckett crew opening some of this so I had a pretty decent idea of what to expect. The fronts are nice and simple with some great photos and a pretty decent design, especially with the team logo featured prominently on the bottom left. These are some of the better veteran players I got from my pack. 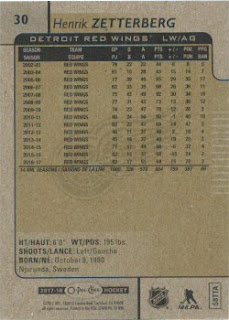 The backs are clean as well with a simple but old-school sort of feel. And ... gasp! ... career stats!! 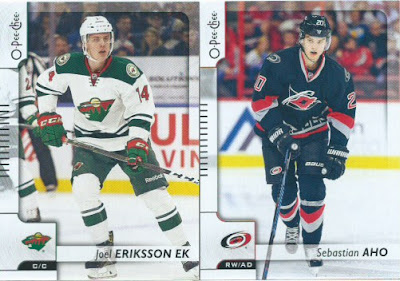 Here's a couple of the young stars who saw action last season. The one bad thing about this being an early season release is that it doesn't have the new crop of rookies like Nico Hischier or Nolan Patrick in it. 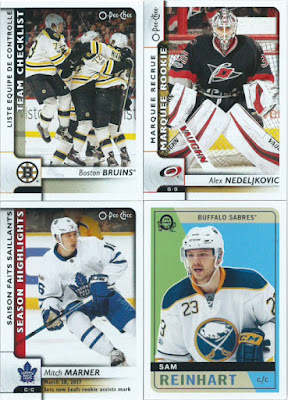 Here are the inserts you can expect in a jumbo pack. It's always great to get a team checklist card. The Sam Reinhart card is a retro design. I've yet to try to figure out if the retro designs are parallels or inserts, regardless I dig them. 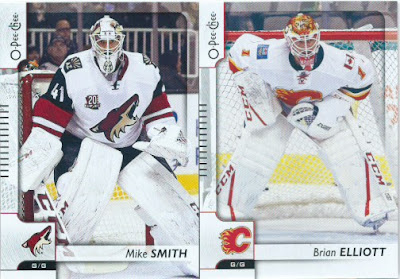 The other issue with O-Pee-Chee being an early season release is that it still has players with their previous teams. Mike Smith is now the #1 goalie in Calgary, ironically replacing Elliott who moved on to the Flyers. 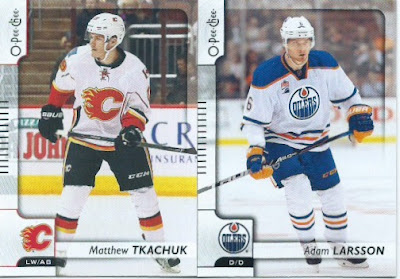 Wrapping up the pack, here's a couple of my favorites to watch from my two favorite Canadian teams. Tkachuk if you couldn't tell by the name is the son of former Coyotes and Blues star Keith Tkachuk. He's also got a brother, Brady, coming up the ranks and might be in next year's NHL draft. Larsson was what Edmonton got in return from the Devils in the Taylor Hall deal a few years ago and I really enjoyed seeing Edmonton in their playoff run last year.

Overall, I'd say I was pretty satisfied with my return on investment here. Would I get another jumbo pack for five buck? Probably as I got a good handful of players I like and some fun cards to boot. You can't really ask for much more than that.