You've Got Mail #74: Sportscards From the Dollar Store 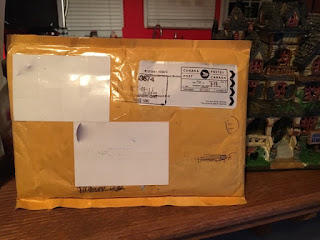 It's been a long time ... a very long time since I've had cards grace my mailbox so when a random package arrived from Douglas of Sportscards From the Dollar Store recently, I was giddy with excitement that someone actually sent me cards in the mail!

As always, a package from Douglas has a nice variety. As much as I like the Edd Roush card here, I think I have to talk a bit about the Royce Clayton card. Clayton was at the near the end of his career in 2006 when he was acquired by the Reds from the Nationals in a bonkers trade still questioned by some fans to this day. It was a weird trade where the Reds got Clayton, Bill Bray, Gary Majewski, and one other for Austin Kearns, Ryan Wagner, and another player. To this day, I don't think anyone is sure what the Reds were trying to accomplish with that trade. Clayton finished the year as the Reds shortstop then moved on to Toronto as a free agent after the season. 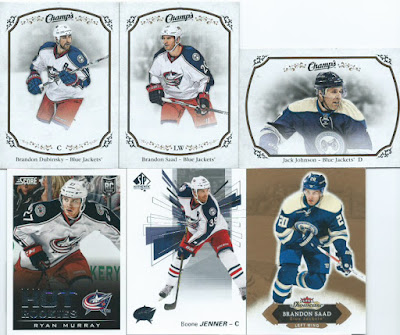 Getting new Blue Jackets cards is always a blast, especially since they may be the lone major league team in Columbus soon (another story for another day) and I'm hoping I can maybe find some decent priced ones at the card show next week. The top three are from last year's Upper Deck Champs set, which is basically their version of A&G. It was a pretty cool product and it's something I hope they bring back this year. Brandon Saad was shipped back to Chicago after two seasons but in return, the Jackets managed to steal Artemi Panarin in return in a shocker of a deal. 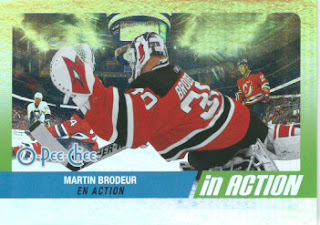 This card was definitely one of the best of the batch and is a fantastic addition to my Brodeur collection. It's a thick card, really shiny, and has an amazing picture on it getting Brodeur in mid-catch to save a goal. 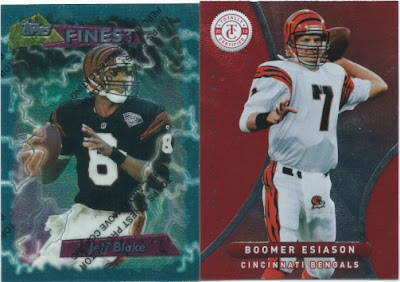 The other thing I can count on for Douglas to send is lots and lots of Bengals cards, and there were a lot. So I'll go through them quickly. First, there were these neat cards of past Bengals QBs, although many try to forget the Jeff Blake era. 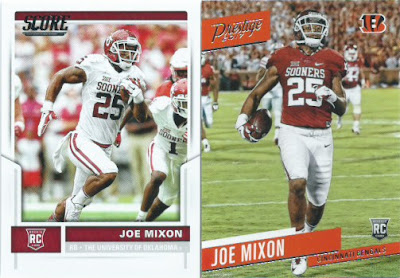 Joe Mixon was the Bengals top pick in the draft this past summer and has seen a lot of action recently, especially since the Bengals dropped Ken Zampese as their offensive coordinator and replaced him with Bill Lazor. The offense that had been sleepy in the first two games, woke up once Lazer was installed, and Mixon seemed to get more carries.

There was also this nice batch of Andy Dalton cards. My collection of his is slowly growing with some quality additions like this. 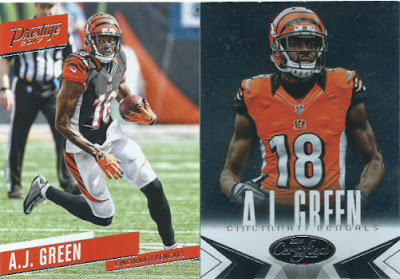 Same can be said for A.J. Green, one of my favorite players to watch on the Bengals. I'm starting to get a decent collection of cards of his as well. 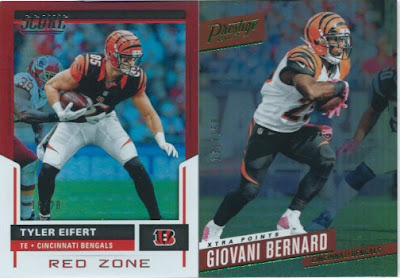 There were also a nice batch of parallels included in the package as well, these were the best of the batch.

Thanks to Douglas for sending all these great cards over, I greatly appreciate it. I'll try to find some stuff to send back to you at some point.