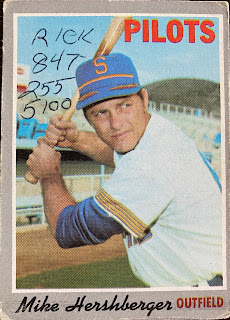 I'm not sure what this 1970 Topps Mike Hershberger card did to warrant getting written on. Nor, am I sure who "Rick" is or what that phone number is for. What I am sure about is that this came in an envelope from Nick at Dime Boxes, who loaded me up with a bunch of cards.
This all came about when he was looking for a home for the Aristides Aquino card below he'd pulled from Stadium Club. 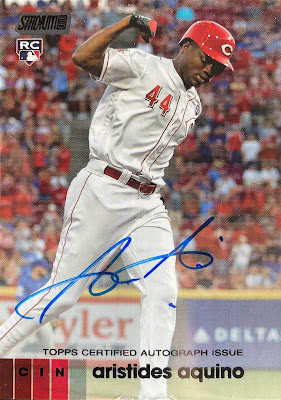 He mentioned there was a little peeling at the bottom, which didn't really bother me at all. I just think this is a really cool card of one of the Reds young stars. Despite a really down season in 2020, he raked in 2019 when he was called up and hit 19 homers over the last 56 games of the season. 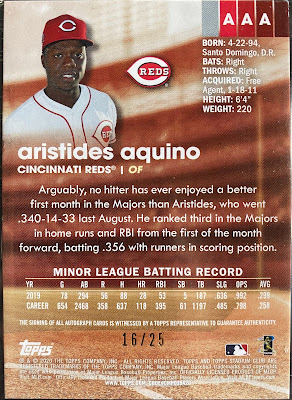 Did I mention it was also numbered 16/25? That's pretty cool! Hopefully Aquino can find his form again this upcoming season but we'll see. 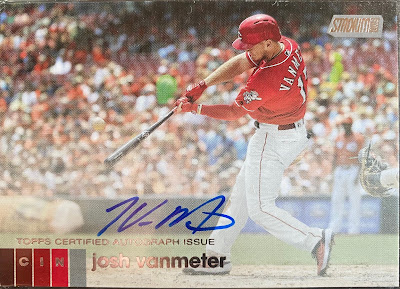 Aquino wasn't the only autographed card that Nick included. Here's another one from Stadium Club of utility player Josh VanMeter, who was shipped to Arizona in a deadline deal last year for reliever extraordinare Archie Bradley, who only appeared in six games for the Reds and was then non-tendered this offseason. 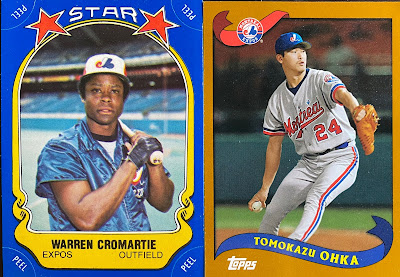 Nick also threw in a pair of Expos cards. I love getting Expos cards from pretty much any era. 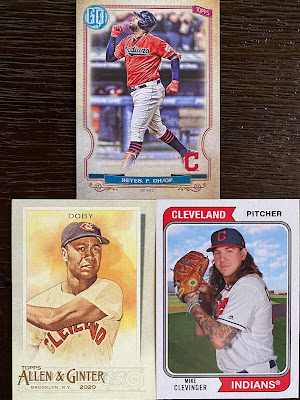 Now for the meat of the envelope, lots of cards to fill out my Indians and Reds team binders. These were some 2020 issues I didn't know I needed until I saw them, although by the time the Clevinger card came out he was with the Padres. 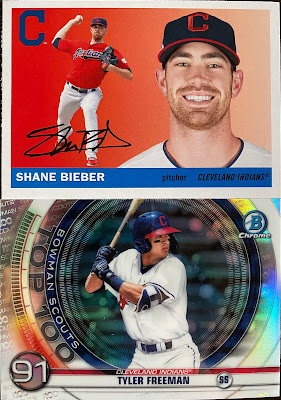 A couple horizontal goodies. Bowman was never my thing as I'm not a prospector but I just love this shiny Bowman Chrome Tyler Freeman card (you'll see another card from this shortly.) 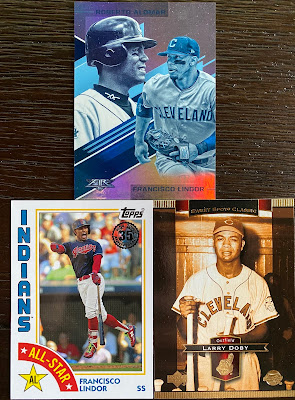 A few more cool cards. I'm writing this just days after the blockbuster deal that sent Francisco Lindor to the Mets. I'm sad to see Lindor leave Cleveland and I know the trade was purely for economic reasons but he was by far my favorite Indians player. 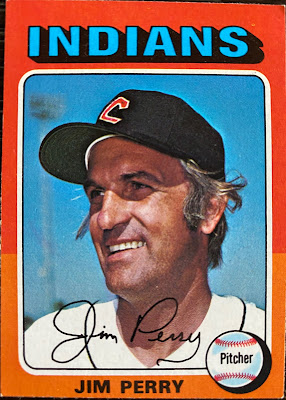 This may look like a 1975 Topps card but it's not!! It's actually a 1975 Topps mini (I think that's the right terminology)? It looks like a 75, smells like a 75 (no I didn't actually smell it), but is a touch smaller.
Anyway, Jim Perry was at the tail end of his career here and was only with the Indians for about a month or so before he was traded to the A's where he finished out his sunset season. The previous season, 1974, he paired up with his brother Gaylord to form a decent 1-2 punch in the Cleveland rotation for a club that finished 77-85. Fun fact, did you know that the Perry brothers accounted for 38 of the 77 wins for Cleveland that season? 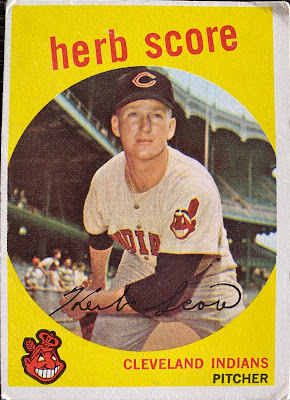 This was probably my favorite card of the package that Nick sent. I'm definitely gaining an appreciation for 1959 Topps and might consider picking up more players like Herb Score here. Upon looking up his info for this piece, I had no idea he was the 1955 Rookie of the Year and was a two-time All-Star. I think the coolest thing about this card though is the photo. It just has that 1950s "feel" to it and I can totally dig it. 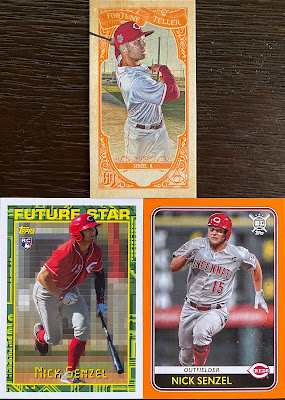 Reds were also included starting with this trifecta of Nick Senzel cards. 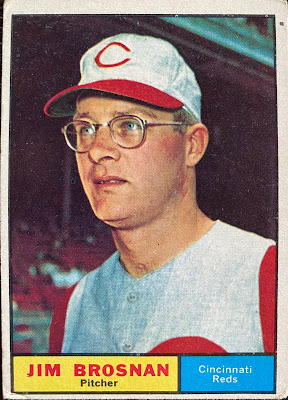 There were also a few vintage Reds with this 1961 Jim Brosnan, who pitched will enough in 1961 for the NL Champion "Ragamuffin Reds" to earn some MVP votes. 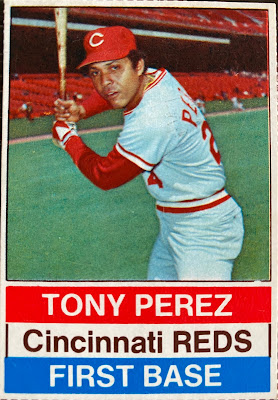 This is probably my second favorite card in the batch, a 1976 Hostess Tony Perez. 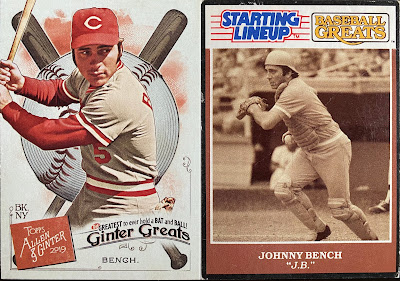 Can't go wrong with cards from Johnny Bench either. I think the Starting Lineup card might be a duplicate but I'll have to check my binder. 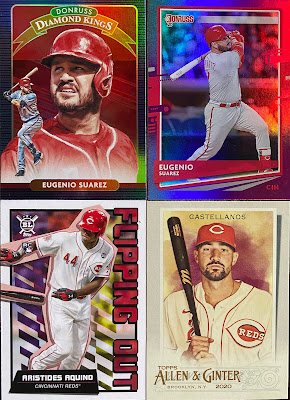 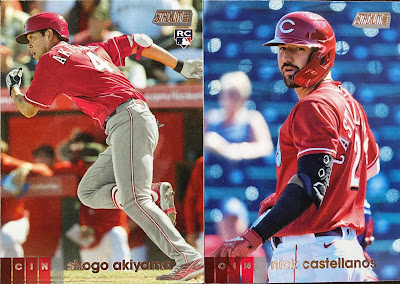 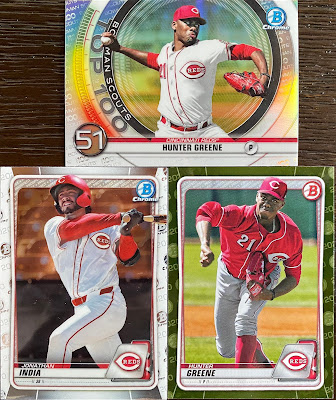 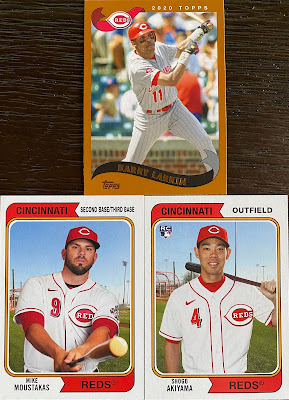 These 2020 cards filled in a bunch of holes as well and highlights the Reds significant additions from last offseason in Shogo Akiyama, Nicholas Castellanos, and Mike Moustakas. If you look at the Moustakas Archives card, I find it curious that Topps squeezed "Second Base/Third Base" as the position when they could've just as easily put "Infield". Also, there were come cool Bowman Chrome cards (see I told you those would come back).
This was another great package from Nick and I appreciate him sending all this my way.
Posted by Adam at 12:00 PM