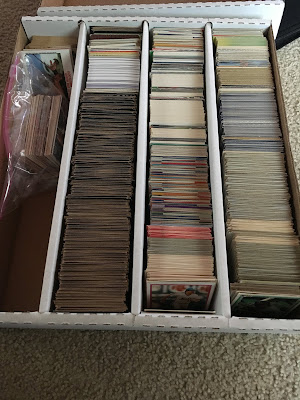 I finally did it.

The vast majority of the cards I kept from the mega-haul back in the spring time are now sorted and organized. In the picture above you'll see the fruits of my sorting effort. The far right row is all 80s, middle right row is 90s, left middle is 1986 Topps and miscellaneous, and the far left row is cards I opened recently that need to be filed. The baggie is cards for the third grade class my friend teaches.

I've shared bits and pieces over the past few months but since now everything is organized, I can easily go by year. I'll start with 1981. 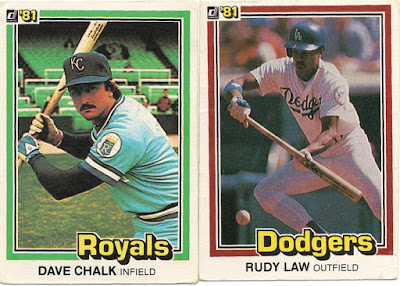 First, we have some 1981 Donruss. It being 1981 Donruss, it's full of strange and weird stuff, including some cards with photos done by Keith Olbermann. There is also fun stuff to be had. I'll admit, I was a little sad when I realized these were the only 1981 Donruss cards to be had but still, 81 Donruss is 81 Donruss. Between the two of these, it's really hard to pick a favorite but if I was forced to choose, it'd be the Dave Chalk card. Two reasons ... 1) the background is old Comiskey Park and I have a soft spot for old stadiums of yore, and 2) ... look closely above his hat. It looks to me like there might be an arrest in progress. 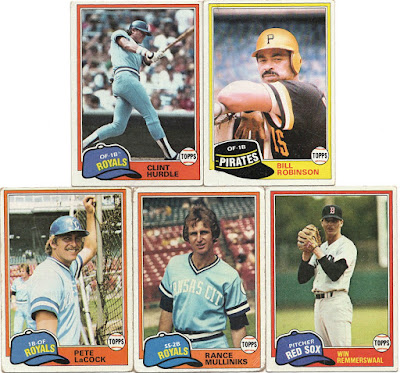 The rest of the 1981 cards come of the Topps variety. I'll freely admit that when someone mentions 1981 Topps, I have to think for a second or two on what the design is (same with 1981 Fleer). That being said, I really do like the design of the card with the hat on the bottom left. I also like how Topps but the little baseball on the right that clearly says "Topps" in all caps.

Regardless, this first batch has quite the cast of characters. Clint Hurdle is currently the Pirates manager and probably the most notable name from this group. The curious one to me here is Win Remmerswaal. First off, Win ... that's just a perfect name for a pitcher. I looked him up on Baseball Reference, looks like he only appeared in 22 games for the BoSox between 1979-80. His most notable claim to fame though is pitching 4.1 innings for Pawtucket in the 33-inning game from April 1981.

Three pretty notable names in this next batch. Mike Hargrove managed the Indians during the 90s glory years and by far had is most success there. Winning two AL pennants and five straight first place finishes from 1995-1999. I always forget about Bert Blyleven's stint with the Pirates in the late 70s and early 80s. To me, he just looks weird in yellow and black. And then, there's the namesake of the "Mendoza line", one Mario Mendoza himself. 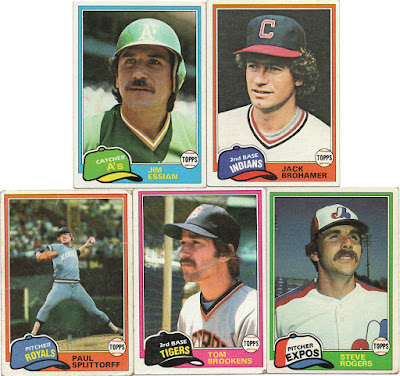 Our last quintet features one member of the Indians with possibly either an afro or really curly hair, that being Jack Brohamer. This would be considered a sunset card of Brohamer as his last year in the bigs was 1980, which was split between Boston and Cleveland. Paul Splittorff was a Royals stalwart from 1970-1984 and was inducted into the Royals Hall of Fame. Closing out this fearsome five some is another player who spent his whole career with one team, that being Steve Rogers.

That 1981 Expos team was something else, with Steve Rogers, Bill "Spaceman" Lee, and Bill Gullickson anchoring the rotation and a fearsome starting eight with Andre Dawson, Tim Raines, Gary Carter, and Tim Wallach among others. With the strike cutting out the middle part of the season and the the "split-season" playoff format, the Expos finished third in the first half and first in the second half. However, they ended up losing out on the NLCS to the Phillies in what was their best shot to get to the World Series in their early years.

That's all for 1981. In the year of Ronald Reagan, the Major League Baseball strike (read Jeff Katz's book if you want to know all about it), the formation of Metallica, and the final fight of Muhammad Ali, I'd say there were some pretty fun cards to go along with it.
Posted by Adam at 5:00 PM