My Four Favorite Cards of 2016

I'll admit, I'm probably one of the last to jump in on this. Oh well, better late than never, right? To come up with this list, I went back through my posts that featured cards from 2016 to help refresh my memory. I wanted to find five cards but in all honesty, I couldn't. So here are my four favorite cards from 2016. 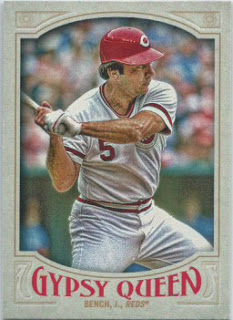 This Johnny Bench card that I picked up at a card show over the summer comes in at fourth place. While it may not be the most exciting card, I really like the way that it has that sort of artsy look to it. I wasn't too keen on the Gypsy Queen design this year when I first saw it but I've definitely warmed up to it. 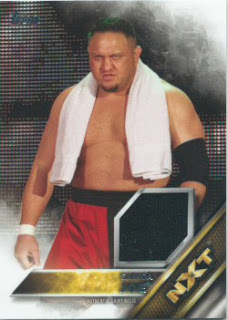 Coming in at third place is Samoa Joe and a relic card nonetheless! One of the best things about buying WWE blasters is that you get a guaranteed relic card in every box and it allows you to get some neat wrestling cards at a decent price. I got this out of a random blaster box I picked up from Target. While I wasn't the biggest fan of the Topps design this year for baseball, I think it worked perfectly for wrestling.

You'll have to forgive the somewhat blurry images on this card and the next card. I was crunched for time when writing this and cropped them from previous scans.

This was the card I initially had penciled in for card of the year. From the first time I saw this card on the blogs, I knew I had to have it. The red border, the old school Indians uniform, and the 70s Indians script at the bottom. I was lucky enough to find this for a dime at the card show I went to this past summer and everything about this card just screams awesome.

And now, the winner for card of the year ... 2016 Archives Carlos Gonzalez! Everything about the 1991 style Archives cards this year was just perfect. If there was a category for subset or partial set of the year, then it would win hands down. This picture on this card is just great as Car Go is scoring and the bright yellow of the left field pole is in the background and the green of the wall blends in the background perfectly. Everything about this card just works and I knew I had to have it as soon as I laid eyes on it.

There's my take on card of the year. I'm waiting patiently for the 2017 cards to roll out, which will be soon, and hopefully some of the cards will be as good as these.
Posted by Adam at 7:00 PM